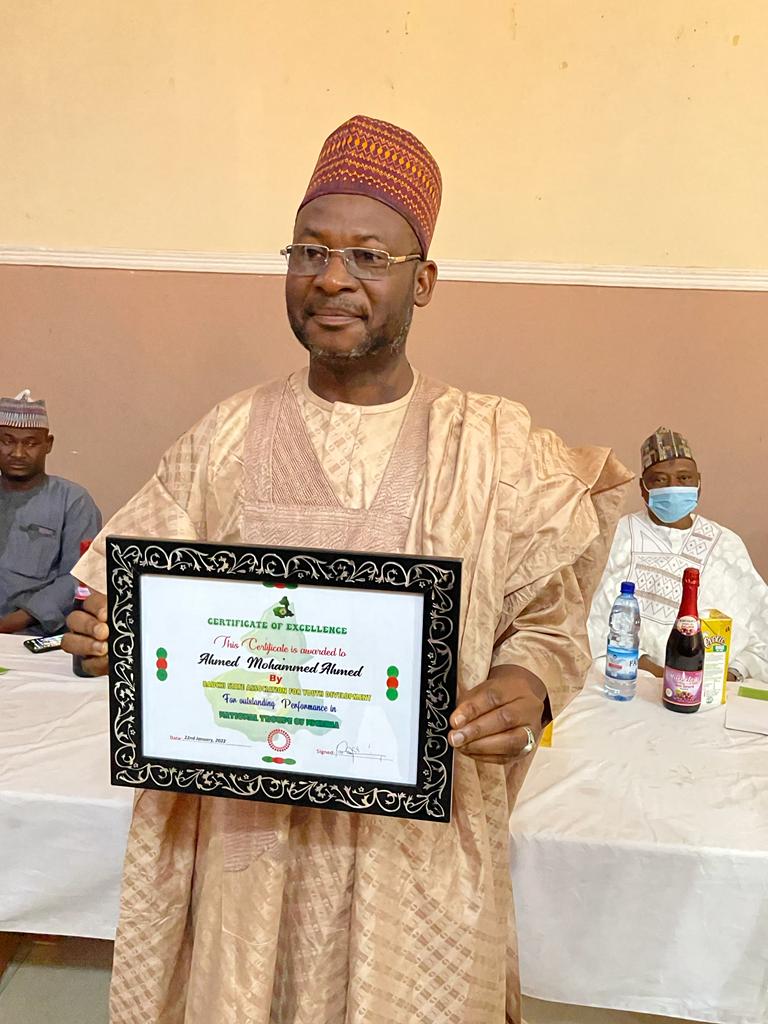 The Artistic Director and Chief Executive Officer (CEO) of the National Troupe of Nigeria (NTN) Mallam Ahmed Mohammed Ahmed has been honoured by the Bauchi State Association for Youth and Development Association (BAYD).

Presenting the award on behalf of the Association at the conference hall of Destination Hotel Bauchi, the patron of the BAYD, Alhaji Shehu Sanin Mallam said that the choice of the awardee by the association was a clear testimony on how he has been impacting positively in the lives of people around him.

“If what we heard from his colleagues, friends and associates today are anything to go by, then the likes of Ahmed Mohammed Ahmed are the people we should be encouraging to contest for elective positions in our society. Because i honestly believe that we will have quality representation that will add value to our people”, said Sanin Mallam.

In his remarks shortly after being presented with the award, Mallam Ahmed Mohammed Ahmed thanked Allah for the honour and also appreciated the Youth Association for finding him worthy of the recognition.

While appreciating the marmot crowd that graced the occasion, Ahmed appeal to the privileged Nigerians engage the youth in a meaningful enterprise, with a view to disabusing their minds from social vices that has become a source of concern to both government and society at large.

He said that the Federal Government is doing so much in an effort to engage Nigerian youth in a productive venture. This, according to him, can seen in the several components of the Social Investment Program.

“The Federal Government has done so much in trying to engage Nigerian youth, especially under the agricultural program like the anchor borrowers, dry season farming and other Agro allied programs”.

“I am appealing to the youth of this country to leverage on these laudable programs of the federal government and to also take it further through maximizing the value chain that are abound in the agricultural sector”, said Mallam Ahmed.

The NTN CEO also urged the youth to be on the vanguard for the propagation of peace and unity in their respective communities, promising that his door will always be open anytime they come knocking.

Earlier, in a touching testimony, one of the guest, Hajiya Maryam Garba Bagel, narrated how Mallam Ahmed Mohammed Ahmed had played a significant role in her life without even knowing her.

According to Bagel, who is also the Bauchi State Commissioner for Science and Technology, it was Ahmed who recommended her for her first development work with Save the Children some years back.

She said that all through the years that she worked with the NGO she had never met him until years after she left the NGO, in a chance meeting where she heard someone mentioning his name and; she asked the person to point him out for her and that that how she eventually got to meet her benefactor for the very first time.

“Ever since that time we have grown close together and  relationship has even cascaded to our respective families. Ahmed is always there for anyone that seek for his assistance. You can be rest assured that Mallam Ahmed will always come to your aid within his capacity at any point you call on him”, said Bagel.