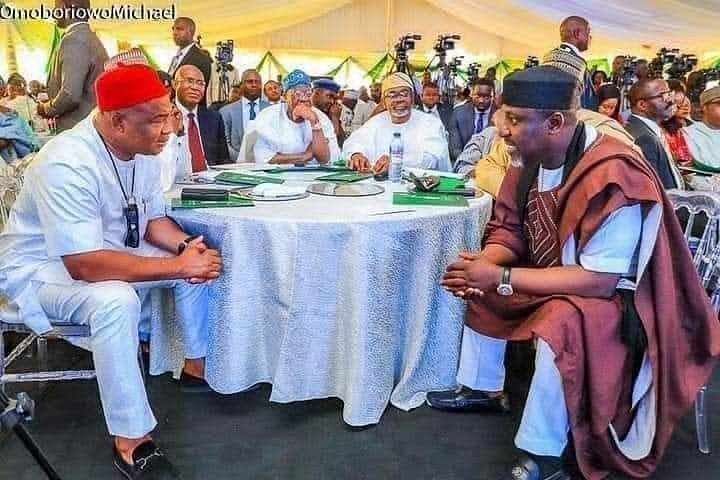 Imo State government said Okorocha’ s mischievous submission has vindicated its earlier stance that the Senator was plotting to get the federal government to declare a state of emergency in Imo by sponsoring insecurity.

“When we averred that Okorocha was the chief sponsor of insecurity in Imo for purely selfish and political gains, some people thought it was mere political talk. But his call on the floor of the Senate on Tuesday for the Senate to  intervene in Imo State has exposed him,” the Commissioner for Information and Strategy, Hon Declan Emelumba said in a statement, Wednesday.

“It is a great pity that a former governor of the state could descend so low to sponsor insecurity in his state just because he wants to scuttle the wheel of justice at all costs. We know he is the one sponsoring kidnapping and arson and rebellion against the state. He is their pay master,” he added.

Emelumba described Okorocha’s speech as a well rehearsed script with the predetermined goal of goading the federal government to declare a state of emergency in Imo.

He said the former governor was crying wolf when non exits, arguing that “the pockets of security breaches were no where near the picture painted by the senator.

“The situation in Imo State is not worse than what obtains in some states, yet the Senate has not been invited by their own representatives to intervene.”

Emelumba said it was regrettable that Okorocha, instead of commiserating with victims of the crisis, wants to make political capital out of it, adding that “the Government in collaboration with security agencies was already on top of the situation.”

Emelumba noted that it was curious that anytime the security agencies were bringing the situation under control, some people will trigger another wave of violence, suggesting that the target is the office of the Governor.

“How come that it is only when the situation is returning to normal that people like Okorocha will raise false alarm? Does it not suggest that they actually know what is happening? ” he asked.

Emelumba however commended the Senate President, Senator Ahmed Lawan for the mature answer he gave to Okorocha.

He further advised both the Senate and other federal government agencies to be at alert so as not to be taken in by the lies and cheap propaganda of the likes of Okorocha and opposition in Imo State.

Meanwhile, Governor Hope Uzodimma of Imo State on Tuesday made good his pledge to return all property forcefully taken away from their rightful owners by the government of Sen. Rochas Okorocha to them.

He has also reiterated his administration’s desire to promote due processes and protect the interest of all law abiding citizens of Imo State.

At a town hall meeting of stakeholders and the Committee on Implementation of the Imo State Whitepaper on Lands and Other Related Matters held Tuesday at Concorde Hotel Owerri, Governor Uzodimma spoke on the need to assuage the pains of the people who were wrongfully treated.

Represented by the Deputy Governor, Prof Placid Njoku who said Governor Uzodimma’s administration has “human face”, has a “listening ear” and “empathetic,” the Governor noted the town hall meeting with stakeholders was a way of sending out clear message that the era of impunity and violation of the rights of the people of Imo State is gone.

“To those whose lands are being restored today, I congratulate you and urge you to be confident that my administration will support and promote only forthright processes.

“At the time that I took over the mantle of leadership of our great State, the Judicial Commission of Inquiry into Lands and Related Matters was already sitting. At my interactive session with the members of the Commission, I confirmed that the Commission should continue and complete it’s work and I promised Imo people that I will implement the report of the Commission.

“When the report was submitted on 1st June 2020, I immediately saw and felt the pains of Imolites whose lands were forcefully wrested away by the then administration. The Government itself was not spared on this land-grabbing madness. Government lands and properties were sadly converted to personal use by the management of the Senator Rochas Okorocha administration,  their families and friends.

“In Orlu, all Government lands at the Government Station Layout and the Eastern Palm University were brazenly taken over by the same people that the people of Imo State entrusted with the sacred duty of protecting and preserving public property.

“In Owerri,  entire layouts ( including the proposed New Government House at Area P), Judiciary quarters and many other areas were taken over for private use. The perpretrators also paid no heed to the basic principles of town planning in their drive. Then I realized that the only way to assuage the pains of the people was a complete restoration of the lands back to their rightful owners.

“Today, In line with the 3R mantra of my administration (Rehabilitation, Reconstruction and Recovery) we are actively reconstructing roads and infrastructure. We are rehabilitating institutions and services. And today, we have gathered for the first phase of the restoration of lands forcefully taken away from their rightful owners.

“Our Town Hall meeting this morning is one of our ways of sending a message to past and future leaders of our State that nobody can violate our sacred values and get away with it.

“My administration will continue to be the protector of the helpless. The era when leaders or government officials will usurp the property of Imolites and hope to get away with it is over.

“To those whose lands are being restored today, I congratulate you and urge you to be confident that my administration will support and promote only forthright processes.”

Amid thunderous applause from the stakeholders who filled the Sam Mbakwe Conference Hall of Concorde Hotel, Chairman of the Committee, Prof. Ukachukwu Awuzie noted that what had happened was a “promise kept, Hope restored.”

Among other findings by  the Panel are as follows:

1.Public Buildings Plot P/2 Otamiri South Extention Layout ( part of public Plot 2 given to Ministry of Women Affairs for the establishment of Skills Acquisition Centre for women), Plot P/5 Naze Residential layout( initially part of Primary Education Commission) were illegally converted to private use by Sen. Rochas Okorocha and given to his wife for her ALL- IN STORE along Aba road.

2.Magistrates Quarters, Co-operative office, and Girls Guide office all along Orlu road, Owerri, were illegally converted to private use by Sen. Rochas Okorocha and is unlawfully being used as Market Square and Kilimanjaro etc.

3.IBC Quarters at Orji and the public road leading up to it were illegally converted to private use by Sen. Rochas Okorocha and now houses Rochas Foundation College.

4..Legislative Aides/Staff Quarters opposite Concorde Hotel was illegally converted to private use by Sen. Rochas Okorocha and is now unlawfully being used as Heroes Apartments Residential Estate.

5.Almost the entire Area ‘P’ , the proposed new Government House was illegally converted to private use by Sen Rochas Okorocha and is now in the hands of his various family members, inlaws and friends.

6.Ministry of Works yard along Okigwe road, Owerri is now an estate of private apartments known as Diaspora Village while all the equipments and the engineering laboratories installed there were carted away by Sen. Rochas Okorocha and his cronies.

9.Eastern Palm University, Ogboko was converted to personal use by Chief Rochas Okorocha.

The Committee thereafter notified all those who have any of their properties or equipment on any of the listed Government areas to vacate them on or before mid of December 2021, noting that “Thereafter, Government through this Committee will recover the land for Government and the good people of Imo State.”