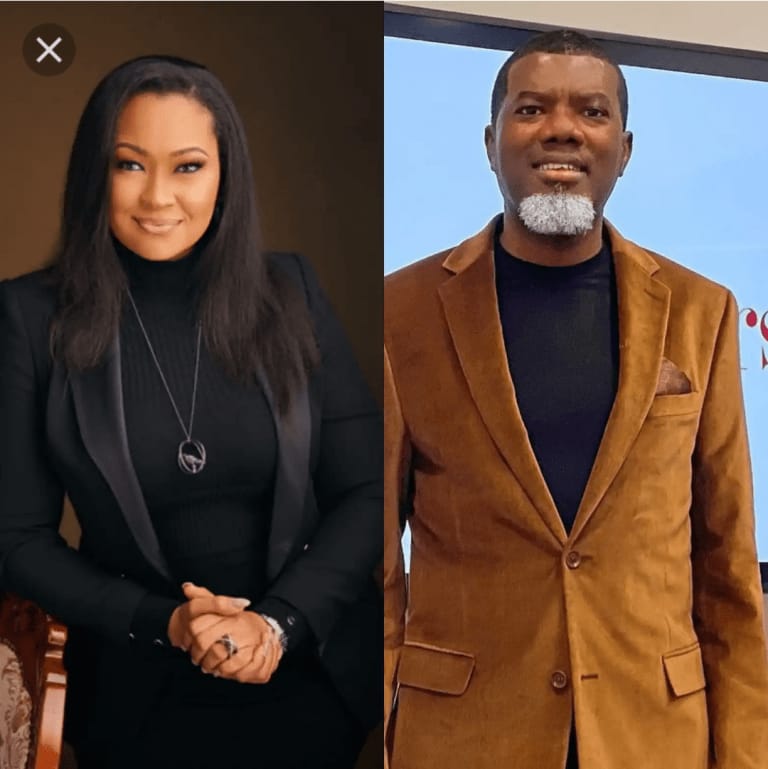 Ms. Patti Onochie has reacted to Reno Omokri’s defense where he debunked Natashi Akpoti’s claim that he made an advance at her some years ago, saying that he lied.

Recall that a Barrister Natasha Akpoti blasted the renowned activist, Reno Omokri following his harsh response to a lady who demanded to be his sugar baby.

Reno Omokri in his response to the said lady described her as an iPhone3 while extolling his wife whom he referred to as an iPhone 13.

However, reacting to this, the barrister surfaced and said that Reno Omokri in 2014 made some advances to kick-off a romantic relationship with her which she turned down.

She also advised him to learn to dismiss certain things as mere jokes rather than taking them seriously as he just did.

Speaking further, she said that during his time as the Special Adviser to former President Goodluck Jonathan, he had numerous girlfriends most of whom he got into Sure P through his office.

Continuing, she said Reno had made some silly advances at her during President Uhuru Kenyatta’s reciprocated visit and she gave him a fake name and contact number.

She wrote: “Dear Reno Omokri, I understand how boring and bitter life must be for you away in the US on asylum.

“No more access to your numerous iPhone 2 girlfriends… most of whom you got into Sure P through your office as an SA to president Goodluck Jonathan. Weren’t you married then?

“I rejected your silly advances in 2014 at the Villa’s banquet hall during President Uhuru Kenyatta’s reciprocated visit…. i gave you a fake name and false contact number but….”

But Omokri in a video he posted on Instagram before his handle was suspended like that of his Facebook account, said he was out of the country on the said date Akpoti claimed the incidence happened.

Taking photos of his international passport to prove his alibi, Reno claimed he was granted an annual leave by GEJ during the Aso rock reception and did not return until June 23, 2014.

But, Onochie in a social media post said that a critical look at Reno’s departure and arrival which he based his points on, said: “You will discover that he was seen on departure (SOD) 23 June 2014 and was seen on arrival (SOA) 23 July 2014 and that is after President Kenyatta’s visit.”

Adding: “It simply shows he left the country after Kenyatta’s visit. He couldn’t have been seen on departure 23 June 2014 and arriving the USA April 28th 2014.

“Only idiots will clap for Reno. Lol”

According to her, Reno is a liar that should be dismissed and not taken seriously.

She continued: “It was because of lies and lack of credibility hence his Instagram and Facebook was suspended.”