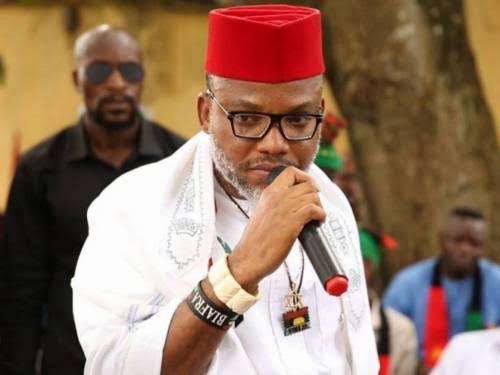 The Federal Government has accused the leader of the Indigenous People of Biafra, Nnamdi Kanu, of being responsible for murder of Chike Akunyili, the husband of the late Director-General of the National Agency for Food and Drug Administration and Control, Prof. Dora Akunyili.

The government further accused Kanu for the murder of a former Presidential Aide, Ahmad Gulak, and over 184 others in the South-East.

This is according to a committee set up by the President Muhammadu Buhari to investigate Kanu, who is standing trial for terrorism.

The committee, which was headed by the Attorney-General of the Federation, Abubakar Malami (SAN), said consequent upon the instigating directives of Kanu, members of IPOB and the Eastern Security Network, carried out massive attacks on democratic institutions especially facilities of the Independent National Electoral Commission with a view to hampering democratic process in Nigeria.

It said the attacks that were carried out between October 2020 and June 2021 led to the killing of 175 security personnel.

The report read in part, “Acting on the instigating directives of Nnamdi Kanu, IPOB members and #EndSARS protesters attacked and killed many security agents, destroyed several public and private properties, including police stations, public transport buses and other facilities across the country.

“That on October 21, 2020, Nnamdi Kanu through an online call-in radio programme(Radio Biafra), further instigated IPOB members to burn down all police stations and kill government security forces, which was carried out, and security personnel (especially police officers) were killed and public and private properties destroyed.

“That 175 security personnel were killed by IPOB/ESN, comprising 128 policemen, 37 military personnel and 10 other security operatives. Killing of prominent Nigerians: Recently there were gruesome killings of traditional leaders: Obi 1 of Okwudor autonomous community, Eze E. AnayochukwuDurueburuo and Eze Sampson Osunwa of Ihebineowerre autonomous community as well as the killings of Dr. Chike Akunyili and eight others as well as the killing of Alhaji Ahmed Gulak on May 30, 2021.”

The committee found that as a consequence of Nnamdi Kanu’s broadcasts, there were 19 attacks on INEC facilities that resulted in the destruction of offices as well as burning of 18 INEC logistical vehicles, several election materials, equipment and ICT gadgets in Abia, Akwa-Ibom, Anambra, Cross River, Enugu, Ebonyi and Imo states.

The Presidential committee stated that 164 police stations and formations, including police Headquarters, Owerri, Imo State were attacked by IPOB/ESN leading to the death of 128 policemen while 144 were injured and 628 vehicles were destroyed.

It said 396 firearms and 17,738 ammunition were carted away during the IPOB/ESN attacks.

“That there were three IPOB/ESN attacks on Nigerian Correctional Service, including the Headquarters of NCoS, Owerri, Imo State where 1,841 inmates escaped. That the Headquarters of the Nigerian Immigration Service, Umuahia, Abia State was also attacked by IPOB/ESN leading to the death of one officer,” the report read.