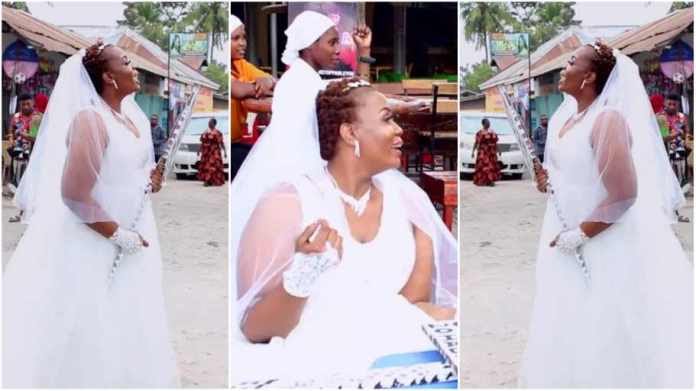 A woman threw caution to the wind and disregarded unsolicited opinions that might trail her after she wore a wedding gown and stormed the street to hunt for a husband.

The woman who was seen carrying a placard in Buza, Dar es Salaam indicating the type of man she is looking for spoke in Tanzanian language.

“I am looking for a husband aged between 20 and 70,” the placard read.

The woman said she will pay her dowry and claimed she is still a virgin.

“I even have the wedding rings with me. I will pay the dowry and even buy the suit for the man who will step forward.

“I am Christian but have no qualms converting to Islam as long as the man is respectful and God-fearing,” said the lady wearing a wedding gown.

She further asserted that she is well-to-do financially and is just looking for a man who will love her. “I have money, I don’t want to stress a man,” she said.

The lady added Wednesday, September 15, was her fourth day in the streets looking for a partner. “I have met many men who want to meet me in the guest house but I turned them down,” she said.

She now plans on moving around different areas around Dar es Salaam to find a husband.

One thought on “VIDEO: “I have money”, says beautiful lady searching for husband on street”