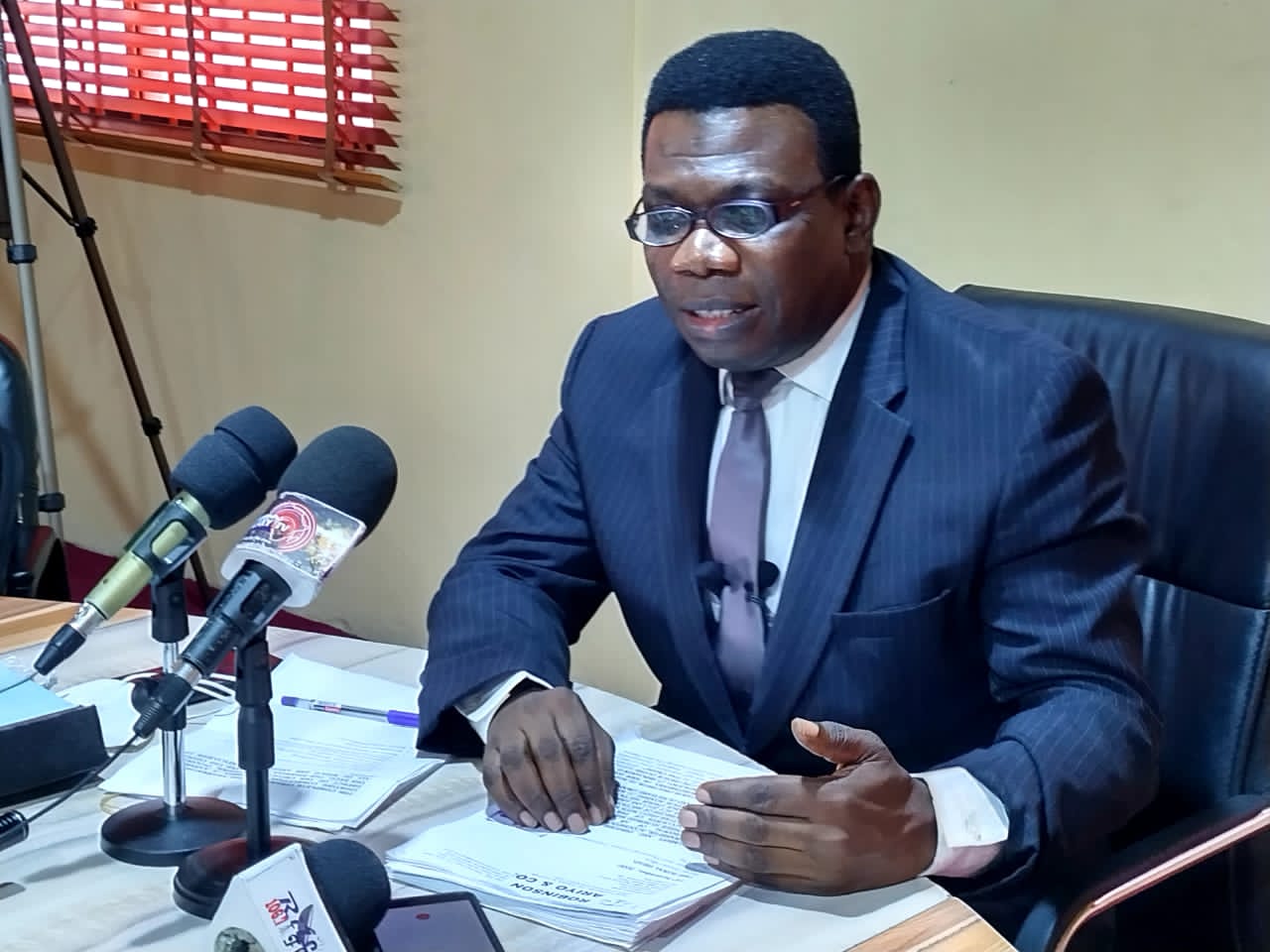 Legal practitioner and Warri Chief, Robinson Ariyo of the Robinson Ariyo & Co., Warri, has appealed to President Muhammadu Buhari, Governor Ifeanyi Okowa of Delta State and the Attorney-General of the Federation and Minister of Justice, Malam Abubakar Malami to prevail on the Economic and Financial Crimes Commission (EFCC) over the missing N300 million from the account of the Itsekiri Regional Development Committee (IRDC).

He made the plea on Thursday during a press conference at the Olu of Warri Palace Hall.

The Egogo of Warri Kingdom said he resorted to sending a Save Our Souls (SOS) to President Buhari, Governor Okowa and Mallam Malami following the alleged failure of the EFCC, the Judiciary, the Force Headquarters, Abuja and the Central Bank of Nigeria (CBN) to bring the alleged culprits to book and retrieve the money.

The IRDC is the product of the Global Memorandum of Understanding (GMoU) initiated by Chevron Nigeria Ltd (CNL) to handle its corporate social responsibilities in 23 oil producing and impacted communities affected by its operations in Itsekiri land.

Representatives of CNL, Delta State government and leadership of the IRDC are signatories to an account domiciled in Keystone Bank Plc in which CNL is Category A signatory without which monies can be withdrawn.

It will be recalled that some social critics, sometime in 2019, had dragged the IRDC to court over the N1.2 billion in the account meant for developmental projects making the money inaccessible.

Chief Ariyo said following a complaint from Engr. Tuasor Omatseye, Aginejuone Agbonekuya, Destiny Noritsegho and six others over a missing N300m from the N1.2 billion in Keystone Bank Plc account belonging to IRDC, he had approached the courts in Warri, the EFCC in Benin, the CBN and the police with suits and petitions, but were frustrated on frivolous excuses.

“The project account has three principal signatories: representatives of Chevron Nigeria Ltd (CNL), Delta State government, and the leadership of the IRDC.

“CNL is signatory category A; meaning without it, no money can be withdrawn from the account,” he narrated.

He alleged that “at a Warri high court, there was a successful conspiracy to strike out the name of one of our clients – Aginejuone Agbonekuya.

“He then appealed that his name should not be struck out. The case was then transferred from Warri to Effurun.

“A team from the IRDC leadership, from the bank and some of the lawyers involved in the case came together without anyone’s knowledge and planned that N300m should be withdrawn from the account and shared in the name of ‘professional legal fees’ for lawyers.

“To do this, they needed to remove the names of those parties to the case who are claimants and who’ll not co-operate with them.

“So they filed a suit. It was in the morning of October 19, 2020, that they filed a court process to remove the names of two parties : Aginejuone and CNL whom they know would not co-operate with them.

“In the Terms of Settlement, they wrote that they’ll take professional fees as ‘frontline charge’ from the account.

“Meanwhile, these cases were still pending in the appeal and Supreme Court. Ordinarily, before a party is removed from a case, the person should have a notice of it. This didn’t happen.

“They filed the Term of Settlement to close the case in the lower court, meanwhile the cases in the appellate courts are still subsisting,” he noted.

According to him, the alleged fraud started when the N300m out of the N2.1 billion in the account was withdrawn as 10 per cent legal fee.

“They claimed that the lawyers charged 10 per cent and I was a lawyer in the case. We never charged such. 10 per cent of what?

“the leadership of the IRDC immediately applied for the order of the judgement of court which the judge, that morning, signed and they went ahead to sign Form 48 of the bank telling the bank that if it didn’t release the money, they’d commit the bank to prison.

“So, they were able to withdraw the money,” he averred.

He, however, exonerated CNL, the category A signatory to the account, saying it did not sign the document.

Displaying some relevant legal documents, the lawyer said the oil giant had deposed to an affidavit to the effect that it did not sign the papers before the withdrawal was made.

“Chevron has no notice of it, neither did it consent to the withdrawal of N300m from the IRDC account with the bank.

“They said they were not also privy to the ‘out of court’ settlement of the case. That the notice of whithdrawal was done in bad faith to surreptitiously remove the suit from thr court.

“They also removed CNL from the suit knowing they won’t agree with them,” he further alleged.

Narrating where the EFCC erred, the solicitor said the anti-graft agency was petitioned on November 24, 2020 over the infractions.

“We petitioned the EFCC and annexed all the documents to Benin. At the end, the EFCC said we had reported the matter to too many agencies and that there’s a civil matter in the court so they can’t investigate further,” he asserted, saying there’s a court judgement that support that both civil and criminal matters can go together.

While alleging compromise by the EFCC officials, Chief Ariyo said his team wrote the CBN to penalise the erring bank for unprofessional conduct of allowing a withdrawal from a corporate account without the compulsory assent of Signatory A.

“CBN replied saying that since there was a civil matter in court, they can’t look into the case.

“We wrote the police at Zone 5, Benin. They found merit in it. They invited the IRDC leaders, who reluctantly came with govt officials.

“They were let go without any form of documentation. After more pressure, the police issued a second invitation and later a bench warrant.

“As they were about to arrest them, a call came from Abuja saying Force Headquarters had taken over the matter. And that we, the petitioners, were suspect of engaging in a conduct capable of breaching public peace,” he narrated.

He called on President Buhari, Governor Okowa and the Attorney General of the Federation, Malami, Chief Ariyo, he disclosed that he had been offered sumptuous gratification to jettison the case against his conscience and well-being of squalid Itsekiri communities, adding that his team escaped the travesty of justice when he eventually petitioned Buhari and Malami.

Ariyo, while underscoring the danger in abandoning the case, warned: “this is too dangerous. We live in a society of public private-partnership. I’m under pressure to remove the case from the court.

“But I can’t keep quiet. Having failed in the regular court, I want the court of public opinion. I’m being branded as someone stalling the balance of N1.8 billion in the bank.

“I’m bothered when people do evil and get away with it, it encourages more people to do evil.

“There are primary schools with leaking roofs, no chairs, no books in Itsekiri land and yet the embezzlers are living comfortably. Oil and gas won’t be here forever.”

Caption: Chief Ariyo addressing the press on Thursday in Warri.