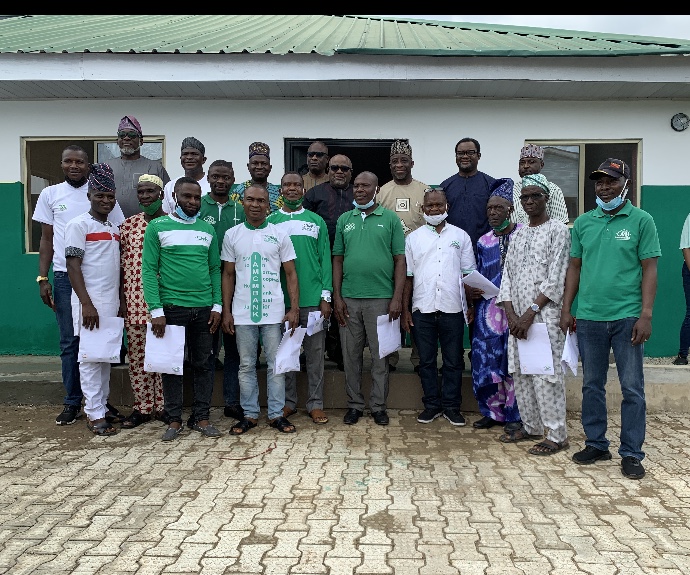 To honour their dedication and loyalty to the organisation, the management of Cooperative Mortgage Bank (CMB) has rewarded fourteen members of staff who had spent between five and seventeen years in service with houses as Long Service Awards.

The houses are located within the Coop Pacesetter Neighborhood in Ajoda New Town, Ibadan, the Oyo State capital.

Speaking at the presentation, the Managing Director and Chief Executive Officer of the bank, Kabir Ayinde Tukur, said the event was specially organised to appreciate dedicated members of staff who had been with the organisation for years.

Tukur disclosed that beneficiaries, who are drivers, security guards and office assistant, were integral parts in the progress of the bank over the years, noting that they had also handled properties in their care meticulously.

He said, ‘’We are here today to celebrate the Long Service Awards. We are here as the board and management of Cooperative Mortgage Bank Limited to appreciate staff that have served diligently.

With their efforts, there has not been any theft in our branches and we have not had any major accident.

‘’We think fit that for what you have done, for keeping our company safe, we should also keep you safe with shelter as you move on in life.’’

While admonishing them to remain dedicated to service, he added that there was no better reward than giving houses to loyal employees of a mortgage bank.

In his remarks, the Chairman of the bank’s board, AVM Walter Ogujiofor (rtd), said he had always been delighted with such occasion where excellence is rewarded.

While appreciating the MD for initiating the gesture, Ogujiofor noted that staff members are the engine room of any organisation as displayed by the beneficiaries who had dedicated their lives to the service of the bank.

He therefore charged them to do better than the good deeds that earned them the rewards, adding that other loyal members of staff should also be rewarded.

Mr Nwokoro Okorie, who appreciated the management on behalf of other beneficiaries, said the bank initiated a gesture that none of them had seen or heard before, adding that the whole arrangement was divine.

Okorie, who had spent seventeen years in the organisation, could not hide his emotions as he could not express his joy.

Also in attendance at the event were the Deputy Managing Director, Musa Abubakar Yusuf, the Acting Company Secretary, Ifeoluwapo Adesina, with Engr Samuel Abayomi Akinsete, Oluwole Okunuga and Adeleke Adeleye who are also members of the board.

Others include the Chief Operating Officer of the bank, Chiwendu Umezurike, heads of departments, and well-wishers.

The bank is currently in the 7-man board of the International Cooperative Banking Association.