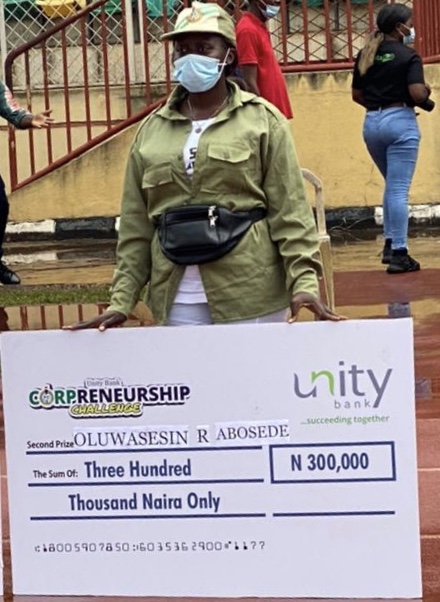 In a chat with Mouthpiece NGR on Sunday, Oluwasesin Ruth Abosede revealed how she won a sum of three hundred thousands Naira in Ogun state during her 3 weeks NYSC orientation camp.

Abosede, a graduate from the department of Crop and Environmental Protection with a 4.02 CGPA was among three people selected for the final of Entrepreneurship competition organized by Unity Bank for Batch B Stream 1 Corp members in Ogun state.

She won the grant after writing her business plan on Male Fashion Designing.

In her narration, “The competition was announced on the 2nd of August at the orientation camp in Ogun state.

We were informed that there are prices to be won by the first 3 that gets to write a proper and feasible business plan.”

“I thought about it and with the support of a Friend(Victoria) I made in camp, I was pushed to write it seeing that I had nothing to lose. So I wrote my business plan and submitted on the last day of submission, because during the week, camp activities took my time and I was looking for perfection but like I said I had  friends who were very supportive and Mr Tolu also came through in ensuring I do not get tired and putting me through how to write it.

“The question of why male fashion designing came up during the pitch section, because I am a female but the truth is I had to take up the opportunity which came my way 2017, through the help of a friend (pelumi).

“Then, I was introduced to Mr Olatunji Japhet who accepted to train me on fashion designing in 2017 without collecting a penny from me, so I was diligent with that and my boss(Japhowears) didn’t hold back the knowledge he had gained over the years.”

“During my stay at Japhowears I met with ottu Pius(Ottuwears) also who welcomed me openly to their space. The two names mentioned are both graduates of LAUTECH— Ottuwears and Japhowears.

“Well, I forgot to mention that initially, I already paid for a female fashion design training which costed a sum of N50,00” in 2017) during a long strike we had in LAUTECH but was called off just a month after I paid that huge amount of money. It was when I got back to school that I got the opportunity to learn from Japhowears, I didn’t mind the fact that he was into male wears majorly, I just knew I could do better at either male or female outfit if I learn well.”

Ruth who revealed that more than 100 corps members participated in the competition said a message was sent to the WhatsApp group created by Unity bank indicating that 17 people made it to the finals and will have to give a pitch on Wednesday of that week.

“My name was 2nd on the list, I was shocked and overwhelmed, because According to news over a 100 person submitted their business plan. I was glad, so I reached out to my friends and they all helped in preparing me for the pitch, I had never done one before, a friend (Mr jejelaye) asked me to check on YouTube as to how to go about it which I did and my other friends (zulu in particular) advised me to just keep it original, ensuring I wrote the business plan myself without cramming anything. She said I should just know the basic and if I’m being questioned I will be able to answer it and I’m glad I followed their advice.”

According to her, the winner wasn’t announced on the day they had the pitch. “They said it will be announced the Friday of that week. Well, Friday came and I was so nervous! fine, I believe I did well at the pitch but come on, we were 17!”

“So, on Friday, they decided to call the first 10 again and they did not call my name until number 10. You can imagine how I was feeling already, I was quite excited I made it to the last 10 but another 7 have to go again to remain just 3winners (lord).”

“I was among the top 3 and I was the 1st runner up, I was aiming for the 1st position but I must say I’m grateful to God I made it to write the business plan, because really I can imagine if I wasn’t encouraged by my friends to write it irrespective of how I was feeling”.

“The grant is a steping stone into setting up a good start for my fashion design business and by God’s grace I believe I can only succeed.”

“I believe God brought people my way to prepare me for this stage of my life and he also kept people that will help me when I get to the stage.

“My project supervisor (Professor Adesina) was of great help to all his project students during our final year, he ensured as much as he could that we saw beyond then and strive for what we really want. I believe that helped me in going through with this also”, she said.