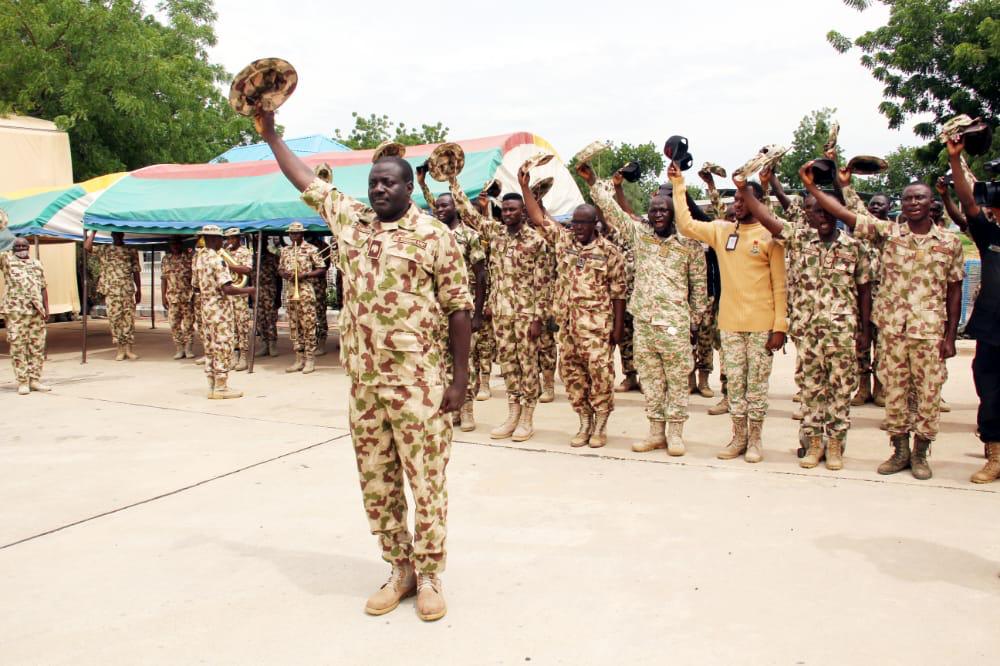 The Chief of Army Staff (COAS)  Lieutenant General Faruk Yahaya, in his efforts to cater for the welfare of troops and boost their morale, has flagged off welfare flight for troops of Joint Task Force Operation Hadin Kai (OPHK) who are proceeding on pass to and fro the theatre of operations to other parts of the country.

Mouthpiece NGR gathered that the COAS performed the symbolic ceremony on Monday, 9 August, 2021 at the Nigerian Air Force Base Maiduguri, Borno State.

Lieutenant General Yahaya in his remarks said welfare of troops is one of his cardinal focus for the Nigerian Army and it is in this regard that the initiative was birthed in order to ease the movement of personnel of OPHK by addressing problems such as distance and other associated challenges, while proceeding on pass to see their families and loved ones.

He said the ongoing Joint operations in the Theatre has further strengthened the synergy between the services and other security agencies which informed the decision of Chief of the Air Staff to provide the Nigerian Air Force Charlie-130 aircraft to lift troops of the Armed Forces of Nigeria (AFN), personnel of other security agencies, as well as civilian staff of the AFN from Maiduguri to other parts of the country.

He stated that the flight will be twice a month to meet the the 2 weeks duration of leave passes in the theatre, He added that personnel leaving on pass will be granted two weeks. The  COAS further directed that all security  measures must be strictly adhered to, as troops will be thoroughly searched,  cleared and documented before boarding the flight.

He urged all troops to utilize the opportunity to promote  synergy  amongst all the services and security agencies in the theatre,  in order to achieve success in ongoing and future operations.

While appreciating the President, Commander-in-Chief of the  Armed Forces of the Federal Republic of Nigeria,  Muhammadu Buhari for his guidance,  directions and the confidence reposed in the AFN, Gen Yahaya plegded his unalloyed loyalty and commitment to defending the constitution of the country. He also extended his appreciation to the Minister of Defence Major General Bashir Magashi (rtd), the Chief of Defence Staff,  General Lucky Irabor,  Chief of the Naval Staff,  Chief of the Air Staff and the Inspector General of Police for their support and collaboration.

Speaking earlier on the schedules of flight,  the Chief of Operations (Army), Major General Olufemi Akinjobi said the welfare flight has been scheduled to cover 3 main hubs, namely Lagos, Abuja and Maiduguri. Troops from Lagos will be housed and managed at Ikeja Cantonment, while those in Abuja will be at the Nigerian Army Forward Operational Base and those in Maiduguri will be at the Headquarters Theatre Command.