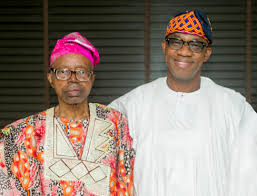 Father to the governor of Ogun State Dapo Abiodun is dead Emmanuel Adesanya Abiodun, an octogenarian, died on Monday at the age of 89.

Adesanya Abiodun died after a brief illness, according to the Abiodun family of Iperu-Remo in  Ogun State.

“Before his death, he worked as a school teacher for many years in the old Western State and was affectionately known as ‘Baba Teacher’ due to his dedication to duty imparting knowledge and instilling the correct values in his students.

“Adesanya Abiodun a devoted Christian, is survived by his wife, Mrs Victoria Abiodun, numerous children, grandchildren, great-grandchildren, and other family members, including Governor of Ogun State, Prince Dapo Abiodun. At the time of this report, the cause of his death is yet unknown, but the family Source said he died after a brief illness.