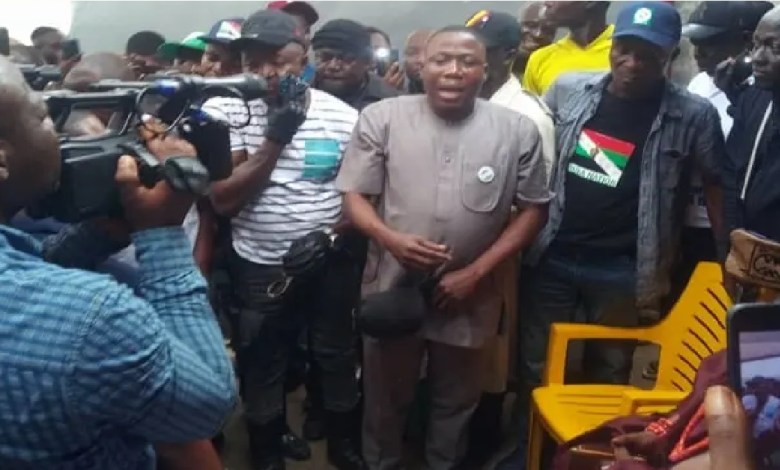 The Yoruba Freedom Fighter, Sunday Adeyemo, popularly known as Sunday Igboho, has made a U-turn, vowed to go on with the Yoruba Nation rally that his group scheduled for Saturday in Lagos State, despite the Department of State Security (DSS) raided his residence.

Sunday Igboho had announced the cancellation of the rally after the Department of State Services (DSS) raided his residence in Ibadan on Wednesday.

But, Lagos State Commissioner of Police, CP Hakeem Odumosu warned Igboho and other agitators not to stage any rally in Lagos.

He stated that anyone caught participating or facilitating the rally would be dealt with within according to the law.

However, in a live broadcast monitored by Mouthpiece NGR on Friday morning, Igboho’s spokesman, Olayomi Koiki, explained that the rally will go as planned at Ojota, adding that Igboho will be back stronger.

He said “I can still confirm officially that the Lagos rally in as much as whatever news or rumours you’ve been listening to from different outlets, will go as planned.”

“The 3rd of July Mega rally will go as planned. All arrangements for the rally has been planned and nothing has changed.

“I’ve spoken with the general Secretary of Ilana Omo Odua, George Akinola and also in the early hours before noon, I spoke with Banji Akintoye and he is working tirelessly for the release of those taken away.

“We might get a form of video from Igboho about the Lagos rally, which might be released, we’ll be deciding that in the next 24 hours.”

He added: “He (Igboho) asked me to tell you all, not to be weighed down about what happened, he is standing with the Yoruba Nation agenda”.

More so, the Umbrella body of Yoruba Self-Determination Groups, Ilana Omo Oodua, has said that the pro-Yoruba Nation’s rally scheduled to hold in Lagos State on Saturday will go on as scheduled.

The group, which is headed by a Renowned Historian and Second Republic Member of the Nigerian Senate, Emeritus Professor Banji Akintoye, made this known in a statement on Friday.

The statement made available by the group’s spokesperson, Mr Maxwell Adeleye, was titled, “Yoruba Nation’s Rally To Hold Tomorrow in Lagos – Ilana Omo Oodua … Writes Sanwoolu, Odumosu, Says “It is the duty of Police to ensure the rally is not hijacked by hoodlums”.

This is despite a police warning that no rally is allowed in the state on Saturday.

“On no account will any actual or rumoured activity, including the planned mega rally, be allowed to lock down the state or hinder the normal daily activities of the good people of Lagos State, the Commissioner of Police, CP Hakeem Odumosu, said at a media briefing held in Alausa, Ikeja, on Thursday.

The Yoruba self-determination group said it had written a letter to the Odumosu, and copied the Governor of Lagos State, Mr Babatunde Sanwo-Olu, to assure them that the rally will be “peaceful, orderly and not hijacked by hoodlums as earlier insinuated by Police”.

Part of the statement read, “Our rally scheduled to hold on Saturday will still hold without any fear or intimidation and we promise to be peaceful like we have always been.

“We have been peaceful, orderly and lawful at everywhere we have visited, therefore, we call on the Lagos State Police Command to ensure that the rally is not hijacked by hoodlums.

“We are happy that the Police already know that hoodlums are likely to hijack the rally. Now, we call on the police to ensure such does not happen like it didn’t happen in Ekiti, Ondo, Osun, Oyo and Ogun States respectively where we’ve held our rallies.

“It is the duty of the Police to safeguard our peaceful demonstration and protect us. On our own part, we promise to cooperate with the police towards ensuring that the rally is peaceful and orderly.”