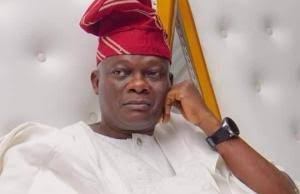 The Oyo State chapter of the Peoples Democratic Party (PDP) has lambasted Senator Teslim Folarin over his recent statement describing the PDP as being in vegetative state.

In a statement on Friday, the PDP described Folarin as a mere political opportunist, a barren politician with zero political clout and a political orphan’ without any known stronghold or base.

The statement signed by its publicity secretary, Engineer Akeem Olatunji said “Mr Pakute” has absolutely nothing to offer the people of Oyo state as Governor than plotting ‘pakute’, violence, and other forms of political ills.

It maintained that the Senator remains a liability he was to the PDP, which led the party to the collosal failure when he flew the party’s flag for governorship in 2015.

The statement read, “Recently, one of the leaders of PDP in Oyo state, Alhaji Hazeem Gbolarumi, while featuring in an interview with Ajibola Akinyefa Tv, was quoted to have said that former members of PDP in Oyo state including former governor Alao Akala and Teslim Folarin would return to the ruling party in the state.”

“However, in what was seen as a swift reaction, Folarin was quoted as saying that the PDP belongs to his past and APC belongs to his present adding that only dying politicians would return or remain in PDP which he said has being in a ‘vegetative state.’”

“The Oyo state PDP however stated that such remarks by Folarin could only emanate from  a ‘nobody’ in the Nigeria’s political space adding that Folarin was a political opportunist and an ingrate who was privileged to have used the political party mechanisms and instrumentalities to win public office.”

“The Oyo State PDP was thrown into amusement by our ‘Pakute setter’, Senator Folarin, who is reputable for being one of the foremost political opportunists in Oyo state in the last 25 years but instead of making impact in the lives of the people has turned himself into a great liability to every political party he belongs at every point in time.”

“We are not unmindful of the fact that, as a political orphan without a political leader or mentor, chances are high that he would say and do things within his state of political nativity in a desperate attempt to curry political favour from his present political party, there was almost nothing he didn’t say against APC, his new darling, when he was in PDP, and as a politician without political integrity and clout he could say anything against the finger that not only fed him politically but also gave him everything he holds today politically.

“Senator Folarin has just one single ambition and that is to become Governor of Oyo state at all cost and be addressed as Mr Governor, nothing more

“But it is clear he has absolutely nothing to offer the people of Oyo state in that capacity than plotting ‘pakute’, violence, and other forms of political ills.”

He is only desperate to be governor.”

“It is on record that the supposed governorship  hopeful removed a power transformer donated by the federal government to a community in Ibadan through his office as a senator because members of the community rejected him at the election polls by voting against him.”

“It is also a public knowledge how our great party, PDP, through our very revered baba and political icon in Nigeria, late Alhaji Lamidi Ariyibi Adedibu took Folarin in as a political son being a political orphan and gave him an opportunity to become a senator in order to test his self proclaimed desire to effect positive change in our dear state.”

“It is very sad and disturbing not only to us in the PDP that many of the undemocratic and unrefined traits and tendencies we saw in him which made PDP leaders and members reject him in the past  across the state to reject his political aspiration to has not only remained but has grown worse in him.”

“Witthout mincing words, we made bold to say as a party that if Oyo state PDP had given a roadside mechanic that senatorial slot given to Senator Folarin, such mechanic would have won and be in Folarin’s shoes today because of the popularity and acceptability of our great party not because of his individual personality, but the strength of our party.”

“We urge Senator Folarin and his likes in his shattered ‘broom’ party to focus on their internal party misfortune and the political battle that lies ahead among others.”

“Aside the ‘Mr Senator’ title he has to his name, we challenge Senator Folarin to mention one present PDP politicians in his Ona-Ara local government or ward he has the political clout to defeat square and fair in a transparent, free and fair election. We urge Senator Folarin not to overrate himself as his days in the Senate are numbered. He also must admit to the fact that he lacks all the ingredients required to become Governor of our pacesetter’s state.”