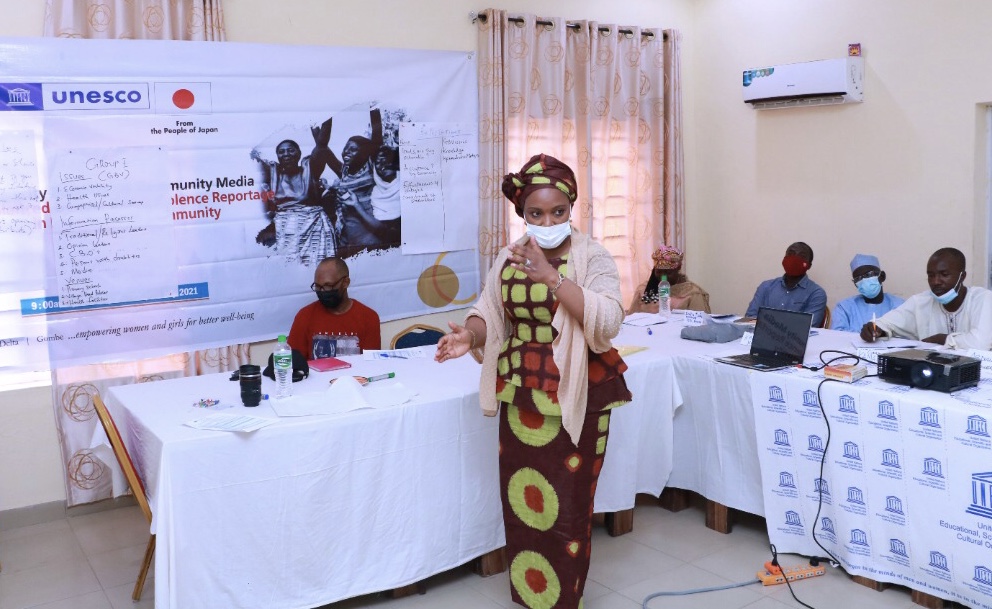 A communication expert from Institute of African Studies, University of Ibadan,  Professor Sharon Omotosho has tasked Journalists and community radio managers to always think ahead and be proactive in developing editorial content that will counter the menace of Sexual and Gender Based Violence in their respective communities.

Professor Omotosho said this at the just concluded two days  capacity building for community media on balanced gender based violence reportage in marginalised communities, organized by UNESCO, in collaboration with Japan Government,  held at the command guest house Bauchi between 29th – 30th July, 2021.

She said with the proliferation of pornography on the internet, culprits of SGBV are bound to try what they watch on unsuspecting victims, stressing that journalists should see how they could counter such things in their respective radio stations and other mediums.

“Contents should be develop to counter  Sexual and Gender Based Violence targeted at vulnerable groups.

“Journalists also have the responsibility of sharing information, lobbying and campaigning against SGBV in their respective communities. You should also  report what benefits the community”, said Omotosho.

While taking  participants on the topic titled ‘citizen journalism and early warning systems’, a resource person, Zubairu Jide Atta implore journalists to always carry out research before going to press.

Atta, who is also a joint consultant in developing the training manual, said that research has been made much easier with the advent of the internet, pointing out that journalists will always be ahead of sexual predators when they engage in research with a view to enriching their content on SGBV issues.

“With research, you will be able to foresee early warning signs and bring it to the attention of the general public and constituted authorities to act upon.

“Also, with the global trend  of citizen journalism , you can equally use your social media handles to share your verified stories and give it a wider reach”, said Atta.

In her remarks shortly before the commencement of the training, the  communication and information officer of UNESCO Regional office Abuja, Mrs Yachat Nuhu , said the training was basically meant for community media in Bauchi State and it was  aimed at building capacity to create awareness by the media  on how to curtail SGBV amidst  the COVID-19 pandemic in communities.

Yachat  said that it is hoped that Journalists trained on SGBV reportage will be abreast on how to use their platform in educating and advocating for the rights of women and girls on prevention of SGBV.

In a goodwill message , Mrs Deborah Sadiq ,the Director, Community Radio of the Bauchi State Radio Cooperation , Commended UNESCO  and the Government of Japan for building the capacity of the station managers.

She said the training would go a long way in developing the skills of the staff in reporting issues that affects  the community.

The training, which attracted participants mostly from all the 10 community radio station managers in Bauchi state, was highly participatory, with  action plans been developed by all the participants, to be implemented when they get back to their respective community stations.

Other participants include journalists from television stations, print and online media.