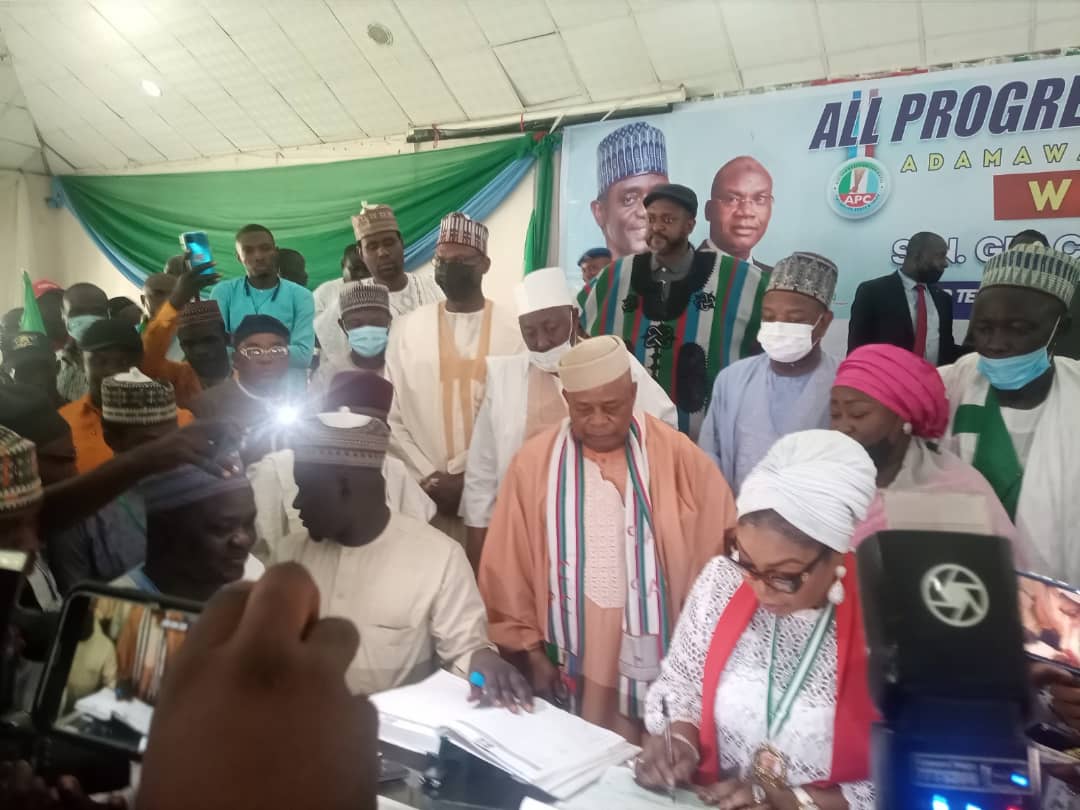 Lelewal Hotel in Yola has on Saturday filled to its overflowing capacity as the National Chairman extraordinary caretaker committee of the All Progressives Congress (APC), His Excellency, Mai Mala Buni along side party chieftain formally received the Board of Trustees (BoT) member of the people’s Democratic Party (PDP), Senator Grace Folashade Jackson Bent to the opposition party (APC) in Adamawa State.

Buni who was ably represented by former senate President, Mr. Ken Nnamani said Grace is a crowd puller with her APC in Adamawa state will reclaim its relevance.

The APC Chieftain from the southeast revealed that Mrs. Jackson is the first female Senator to formally decamped to APC because she considered the party to be a moving train.

He assured that the party is a moving train and wise people like Grace are grabbing the opportunity because in 2023 APC will still clinch the presidency seat.

“APC is getting stronger by the day, it’s becoming more vibrant than ever before, Grace is a crowd puller, we welcome her to the moving train. With her, we are claiming our political relevance in Adamawa state, and in 2023 APC will clinch the presidency seat.” Ken said

Grace who has formally registered her membership in the Dung ward of Numan Local Government Area of the state as a full-fleshed member of the APC in the presence of the Governor of Kebbi State, Atiku Bagudu, Jigawa State Governor, Mohammed Abubakar Badaru, Governor Samuel Lalong of Plateau, the first Lady, Mrs Aisha Buhari, represented by Assbe Villita and the Deputy Governor of Kogi State, Mr. Edward Onoja who represented Governor Yahaya Bello.

Reacting to her defection, the Governor of Jigawa State, Mohammed Abubakar Badaru said despite the fake news, the lies, the campaign of calumny against the APC Government that Nigerian Masses believe in the leadership of President Mohammadu Buhari.

He said in all aspects of life, Buhari has touched the lives of Nigerians in many positive ways because his performance speaks volumes for itself.

According to him, Senator Bent is lucky to have joined APC at a time people in hundreds are joining the party because they are realizing it to be a promising party to Nigerians, and her indelible records while a Senator is all the time speaks well of her.

“People are joining APC in hundreds and many from Adamawa are coming to join also, it’s APC, a train of the moment and I’m calling on many more people to join soon, let’s get moving to save our dear nation.

“Despite the huge drop in our revenue generation, the social investment programs are there to speak of themselves,

” The 260 Road projects inherited by Buhari’s administration are been completed, he is working on over 800 roads across the length and breadth of this country,” Bagudu said

The North East Vice Chairman of APC, Prof, Mamman Tahir (SAN), and the First Lady, Hajiya Aisha Buhari who was represented by the Director-General, National Women Commission, Dr. Asabe Villita spoke in the same manner that it’s a special day around once more in bringing reconciliation, Winning over many prominent politicians in the country.

He extolled Grace as a big politician in the state, not a local player and she will no doubt revive the party’s chances of winning the election in 2023.

While reacting to her defection, Senator Jackson said her eyes opened and she got a lot of wisdom when she defected to APC.

She said one of her reason to dumped PDP despite being the party BoT member is because of her many discoveries about how President Muhammadu Buhari is taking the country to greater heights.

According to her, she joined APC with another tune of concern for the people of Adamawa State, most especially the Southern Senatorial District to dance the tune of APC loudly.

“I’m dancing the tune of APC, I’m their willing instrument that I can be used to dance and sing well for the total liberation of my people. I will dance to bring development, to build the hospitals and schools, to build places of worship and give scholarship to our children and wards, I will dance to bring more democratic dividends of helping the less privileged.

” I will make sure to do more than what I have done while in PDP because APC is for the Nigerian Masses, which I’m willing to join hands with my party leaders to build a country of our fatherland where happiness, peaceful coexistence will reign.” Grace said