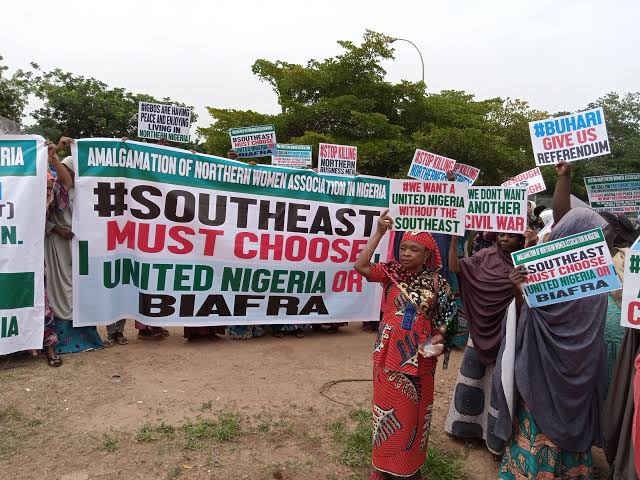 Amalgamation of Northern Women Associations in Nigeria on Saturday called on President Muhammadu Buhari and the leadership of the National Assembly (NASS) to call for a referendum on the agitations by some sections to secede from the country.

They demanded that if the country must break, it must be in peace without resorting to another civil war.

The women who trooped out in large numbers for a peaceful rally at the Unity Fountain, in Abuja on Saturday with placards decried the build-up tension across the country as a result of secession agitations and called for peace, appealing to the federal government to allow people to exercise their right of self-determination of chosing whether to live in peace in Nigeria or leave the country.

Addressing newsmen after the rally the national coordinator of the amalgamation, Hajiya Hadiza Adamu said their cry for peace stemmed out of the fact that women and children are the victims of war or insurrection, hence their call for a peaceful approach to resolving the festering agitations for secession.

Making a passionate appeal, Adamu said, “we as mothers are always at the receiving end of any war, insurrection, killings, and acts of terror. When our men were killed, we were raped and our children rendered orphans, we have nowhere to run to.

“Nigerian History has shown that women carry the heavy burden of war and acts of insurrections and terrorism. We have gone through it from 1967 to 1971, our men died and left us with the children to cater for out of nothing, other men that survived simply moved on, but we never moved on.

“The aftermath of the war and the sufferings left lifetime scars in our hearts and on our bodies. It is for this reason that we come together today and say we don’t want another war, another insurrection.

“We, therefore, unanimously call on President Muhammadu Buhari as the leader and father of the country and the leadership of the National Assembly, President of the Senate, Dr. Ahmad Lawal, and the Speaker of the House of Representatives, Rt, Hon, Femi Gbajabiamila to immediately call for a referendum in the country, let people choose to live in peace in Nigeria or leave, any other group or nationality that wants to secede to exercise their rights of self-determination like the southeast has been agitated for decades to be allowed to leave Nigeria peacefully, without resorting to a second civil war.”

The group also decried the increasing wave of carnage going on in some states of the South East region of the country as a result of agitation for secession which has led to attacks on the lives of Northerners in the area, destruction of critical national infrastructures, democratic institutions and killing of military and Police personnel

According to Adamu, “Today the Igbo nation has turned the entire southeast to almost a war zone, northerners irrespective of their tribes are no longer safe, States’ infrastructures are no longer safe, service personnel from police to army are not safe, INEC offices and other symbols of democracy in the country are been destroyed on daily basis.

“Our husbands that go to do business in southeast no longer return home safe, our political leaders who travels to the southeast on national assignments are assassinated in broad daylight.

“Commuters in the southeast are often forced out of vehicles to be profiled and if they are northerners, they are usually executed there and then.

“It is in the light of the above that we are saying enough is enough and let Mr. President allow for a referendum that will make Igbos realize their long-term dream of being a Biafra nation.

“Let Igbos have their independent nation away from the rest of Nigeria,” the women demanded.