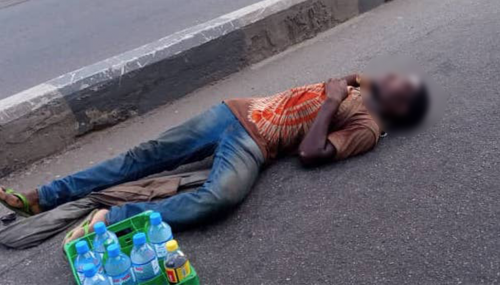 A street trader was on Wednesday crushed to death by an unidentified driver at the Ile-Epo axis of Lagos state.

The yet-to-be-identified man was reportedly found lying in the middle of the road after he was run over by the driver.

His wares (bottled water and soft drinks) and an umbrella were placed beside his lifeless body with visible stains of blood on his trousers.

Efforts to reach the police spokesman for Lagos State, Muyiwa Adejobi, were futile as calls and text messages to his phone lines were not responded to.

SaharaReporters observed that hit-and-run accidents in Nigeria hardly get reported in the media and the victims rarely get justice though such occurrences occur regularly.

Below is a timeline of about seven hit-and-run accidents documented in the media since January.

January 21: A middle-aged man was killed by a speeding driver along Ihiala-Owerri road in Anambra state. Both the driver and victim were unidentified.

January 26: A man, Emmanuel Adeosunbokan, was knocked down by a hit-and-run driver on his way to work. He died from the accident.

February 7: A hit-and-run driver killed a male adult who was crossing the road at Aroma junction along Onitsha-Enugu expressway in Anambra.

April 16: A pedestrian identified simply as Silva, was injured by a hit-and-run driver in Lagos but was luckily rescued by officials of the Lekki Concession Company.

May 3: A pregnant wife and her husband were killed by a hit-and-run driver in Delta State. The couple were identified as Mr and Mrs Kingsley Akpor.

May 5: The proprietor of Austin Pharmacy, Austin Umweni, was killed by a hit-and-run driver on Airport Road, Benin City while jogging early in the morning.

The driver was said to be driving a Mercedes Benz car when he hit Umweni, who was said to be a keep-fit enthusiast and who usually engaged in early morning jogging along the route where he was killed.