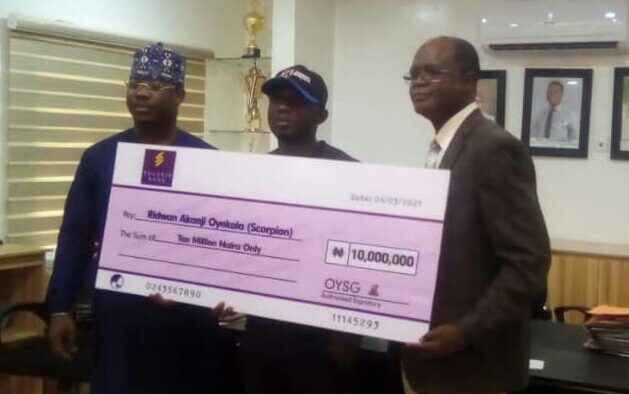 The presentation was done on behalf of the governor by the State’s Commissioner for Youth and Sports, Asiwaju Seun Fakorede in his office, where he called on youths to emulate Oyekola by directing their energy to worthwhile ventures.

In his address, Seun Fakorede commended the State Governor for being a sport enthusiast and man of his words for fulfilling the promise made to the boxer about the monetary reward and for making sure that sporting activities in the State reached greater heights.

He charged not relent in his efforts to climb the ladder of success in his boxing career “let this feat be the beginning of greater success in your boxing career, I charge you not to look back till you achieve what no other Nigerian has achieved in boxing, which is to become world greatest boxer.

“This is an avenue to call on all youths to direct their energies towards something enterprising and make a good name for themselves and their families, the present administration has made it a matter of necessity to always support youths in whatever positive area they embarked upon and the governor said I should let you know that he is proud of you.”

In his response, Ridwan Oyekola thanked God for using Governor Seyi Makinde to bring back the glory of the pacesetter State and appreciated the State Commissioner for Youth and Sports Asiwaju Seun Fakorede for being a good leader of Nigerian youths in sports.

He assured the governor to win more laurels and become the first Oyo State to become the world boxing champion, as he charged the federal government to create enablement for sports to grow in the country.

The occasion was witnessed by the Permanent Secretary, Ministry of Youth and Sports Mr Oludele Oyadeyi, Special Adviser to the Governor on youths Honourable Kazeem Bolarinwa, special adviser on sports, Honourable Tobi Oyewumi, Director Sport Administration, Mrs Adegoke, amongst others.