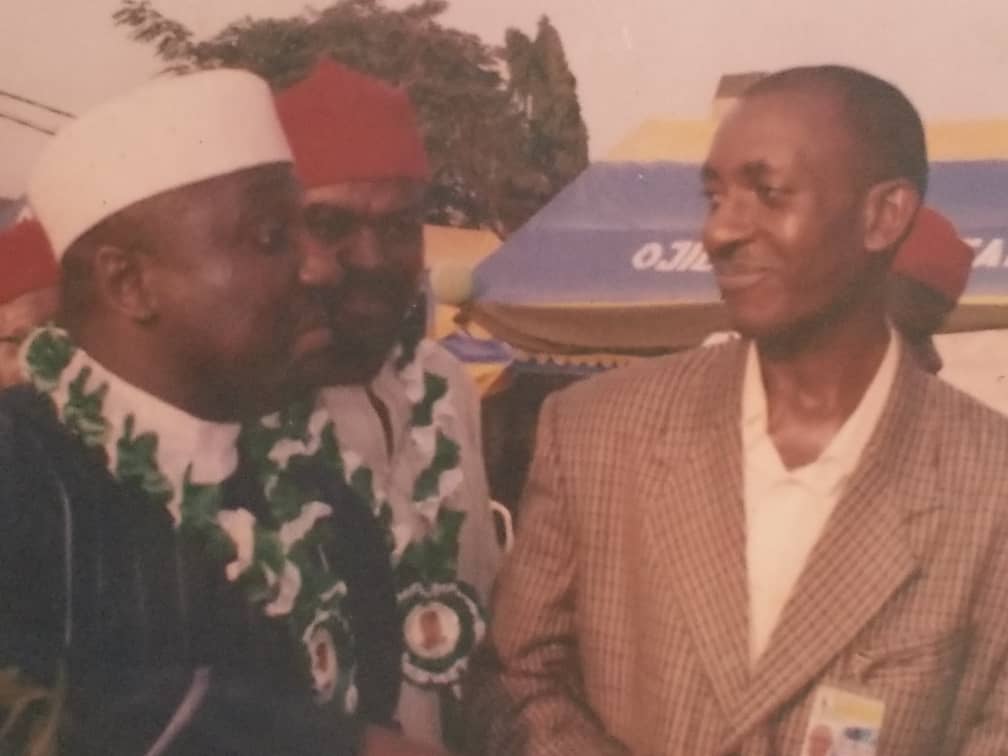 Rochas Okorocha will be President, says young boy who resurface 15years after

After 15years, The Boy that leads the Presidential Campaign for Rochas Okorocha, the first-ever in the history of Nigeria Resurfaces again! Samson, (ANSOROK) is his nickname in the

The young man that said one day Rochas Okorocha will be the President of Nigeria, and his Own Group will be on the front burner to see that it happens, Resurface again!  With his 2007 Group Name called, All Nigerians Support Owelle Rochas Okorocha (ANSOROK) 2007.

As the 2023 Presidential upcoming Elections draw near, and the way it’s Gathering Momentum and zones to produce the Next President. The one time National Presidential Campaign Coordinator of ANSOROK.

Heard an emergency meeting at godfather hotel Lagos state, while briefing them he quickly took them down memory lane that ANSOROK is not a new Organization, this group was established in the year 2004 but start full operation in the year 2005 during the build-up of the 2007 Presidential Election, and Rochas Okorocha was their preferred Presidential Material out of other IGBO candidates at that time to liberate Nigeria from poverty, this is few of the coordinators’ speech extracted.

Prince Adewale Samson who happens to be the founder and Coordinator the Group (ANSOROK 2007) in a welcome address said we have not started any campaign for Rochas Okorocha yet, this is an urgent meeting for like minds and past leaders, members of ANSOROK 2007, and other various group leaders that are here present, I know you all are now leaders from another group championing other Presidential aspirants, but first

campaign, (but we were not treated well during and after that Election.)

time to time I will not mention any names here, That Rochas used and dumped us during the 2005/7 period, (this is Not True!)The truth is those working Around Rochas Okorocha are holding our money and all our sweat and labour are on their head, God will judge let us leave Rochas out of it. Because we did a follow-up to request for all

our personal Resources spent but they did not allow our Request to get to him.

of our biggest rally we Organized in Lagos, “quotes from ROCHAS” he Said I know you are all spending your hard earn resources and time on

ANSOROK project that posterity will not forget us, that we should please itemize all we have been doing and other projects we have ahead

for him and bring to Abuja, which we did submit to his office through DHL and hand-delivered.  All that is history, I know all that Documents did not get to him.

We need to move forward. One day we will meet again and discussed that. This time even though we are going to work for him or not, our Advice to Senator Rochas Okorocha be careful of sycophants around him. He must this time try to supervise all his projects if he really wants

to achieve his Dreams.

Not to waste our precious time because some of you came from outside Lagos for this urgent emergency meeting, I am so glad to see old faces

and new ones among us here today, may God bless you all and grant our hearth desire, this time we are going to be wiser and shine our eyes

time, said I invited just 20 of you my closed Allied and Campaign Coordinators to this meeting Today, just 14 of you are here present now, which shows we are concern about the happenings in Nigeria and we needed to quickly meet to chart the way forward I need Stressing that the major objective of this meeting was to brainstorm on ways forward for the people of the South West, South-East and South-South zone Come

2023 only, and nothing more. Thank you all for coming.

meeting one of the leaders of a Tinubu group said, so i waited outside after the meeting  we spoke with  the Secretary Mrs. Jumai who told us that they did not reach any conclusion on a preferred candidate yet, but a 6 (six) Man Consultation Presidential Committee was set up and headed by the Coordinator of ANSOROK Prince Adewale Samson and herself the Secretary her Group Name is Liberty Movement she is the National Women Leader of that group, that she represented her group in the meeting.

Mrs. Jumai who said 5 (five) Names from the 3 Southern Geo-Political Zones each were Pencilled Down for consultation, making 15 Presidential

hopefuls. Few of them are Technocrats and not the Regular everyday Politicians we use to know. We try to find out from her the names of all the Southern zone. Pencilled Down for Consultation met a brick wall as she said only Prince Adewale Samson can release it to the Press, we also ask Mrs.Jumai if they have reached out to Rochas Okorocha if he is also contesting for President Come 2023, she said from the fillers she got

from his ANSOROK Coordinator it is possible Rochas will Contest the Election as he has been in the race more than other Igbo Candidates,

we also find out from her if they are still going to retain the Group. Name as ANSOROK 2023? She said this is what she cannot tell for now

because that name was mainly for Rochas Okorocha Presidential bid at that time 2007, that now we have some names penciled down to Consult, But for her, she is from the Northern Zone and the Presidential Consultation did not favour them and her zone, but she loves Rochas

that Rochas is a man for the Poor Masses.