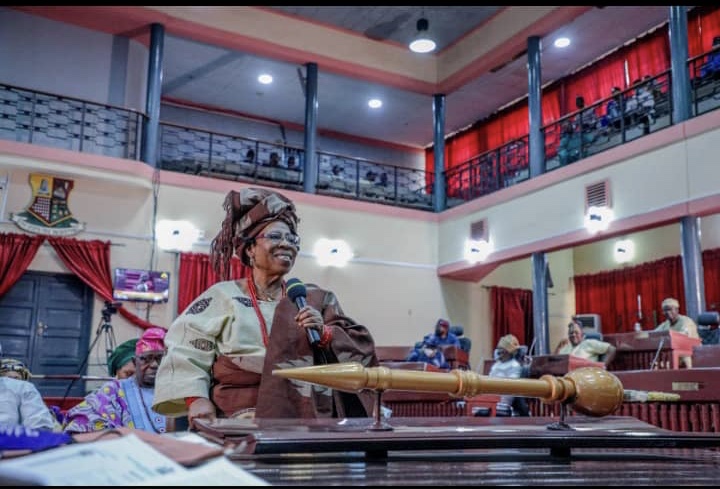 The Oyo State House of Assembly says the Legendary Yoruba Actress, Mama Abiodun Duro Ladipo deserves to be given National recognition and honor to appreciate her immense contributions to the development and promotion of Yoruba Arts and Culture, especially Yoruba plays.

The House stated this at a Special Plenary session held in honor of the Octogenarian who was the wife of the late Yoruba theatre Icon, Chief Duro-Ladipo.

The Legislators who showered encomiums on Mama Duro-Ladipo known by her stage name as Oya or Moremi, and her late husband, recalled some of the evergreen Yoruba plays of the couple which they said presented, exposed and projected Yoruba culture and language to the international Community.

The House of Assembly also promised to support Duro-Ladipo Foundation and some of the plays of Mama as a way of celebrating, appreciating and honoring the Actress while she is still alive.

The Speaker Oyo State House of Assembly, Hon Adebo Ogundoyin said the Special plenary session was to honor and acknowledge the epic work of the living theater legend who symbolizes the culture and tradition of Yoruba.

” We are happy to associate with you Mama. You are one of the trail blazers in the theater industry in Nigeria. We will continue to appreciate you as a successful Yoruba dramatist who carved a niche herself in the art of acting.” Hon Ogundoyin said

Many Lawmakers who spoke at the Special Sitting including the Chairman House Committee on Culture and Tourism,Hon Isiaka Kazeem Tunde (Oyo East/West), Hon Olatunde Kehinde (Akinyele 2) and Hon Kazeem Olayanju (Irepo/Olohunsogo) said the theater profession in Nigeria owes a lot to the likes of Late Chief Duro-Ladipo and his wife, Late Chief Hubert Ogunde , AdeLove and so on who hailed from the South West region of Nigeria.

According to them, notable Yoruba works of the Duro-Ladipos like Oba ko so, Oba Waja, and other films like Ajani Ogun, Ija Ominira, Aropin ni teniyan, Ayanmo, Ija Origin among others showcased the Yoruba rich cultural heritage and mythology.

Other Lawmakers Hon Oluwafemi Oluwafowokanmi (Ibadan South West 2), Hon Fola Oyekunle (Ibadan North 1) and Hon Olawumi Oladeji (Ogbomoso North) who called on the present day Yoruba actors and actresses to produce films of high quality and good story line like the legendary plays of the Duro-Ladipos, urged the Federal Government to recognize Mama’s contributions to the work of Arts.

One of the Guests at the Special sitting, Oloye Lekan Alabi said it was thoughtful and timely of the Oyo State House of Assembly to honor Mama Duro-Ladipo while still living.

Oloye Lekan Alabi explained that it was not a fluke that the famous Oba ko so play (The King did not hang) of Late Chief Duro-Ladipo won the Commonwealth Arts Festival in 1965 hence he commended the House of Assembly for the honor done to Mama Duro-Ladipo.

The Octogenarian appreciated the Oyo State House of Assembly and stressed that appreciating people who excelled in their chosen career was necessary to encourage others to give their best to their profession.

She said theater was not money spinning and not all comers affairs in the early 60s and 70s , and urged the Oyo State House of Assembly and the State Government to support some of her plays yet to be released.

She sang few songs from some of the legendary plays to the admiration of the Lawmakers and other guests who attended the Special plenary session.

It would be recalled that Mama Abiodun Duro-Ladipo celebrated her eighty years birthday in December, 2020.