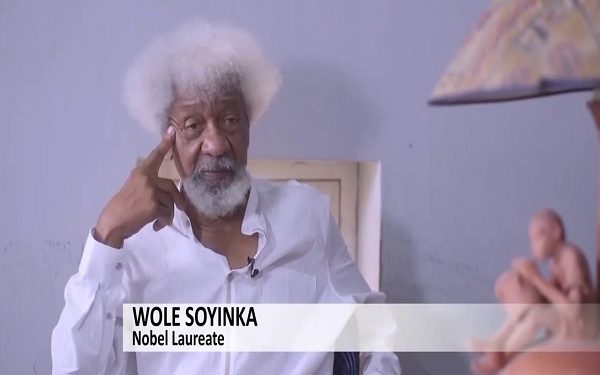 Nobel Laureate Prof. Wole Soyinka has expressed worry about the current state of the nation.

He said President Muhammadu Buhari does not appear to understand the gravity of the situation in the country.

The eminent scholar spoke on Tursday on Arise TV while reacting to the police statement that cows did not invade his home in Ogun State, where he said he and his grounds men recently drove some invading cows out of the premises.

Soyinka linked the widespread herders’ clashes with their host communities with the seeming leadership failure at the centre.

The literary icon noted that President Buhari does not appear to show sufficient concern about the situation.

“I have said this before and I have to repeat this. Buhari does not appreciate the situation. I see no evidence that he understands how grave the situation is. I have said it again and again that I do not believe that he is in charge because it is not possible, in my view, for a Head of State and Commander-in-Chief of the Armed Forces to say he is presiding over a nation and things get to this level. Something is critically wrong within the leadership of this nation.

“That is where we civilians must come in. We must pick up the slack for our own situation, our own salvation. That is why I resent becoming individualised. Wole Soyinka is just another individual, just like another farmer, another student.

“So, I want the people to understand this: what happened to me by this incident is just typical of what is happening to millions of people all over the country. We cannot just sit still and say we are reliant on central help when obviously it is not coming,” he said.

The Nobel laureate narrated how some cows invaded his premises, an incident he reported to the police but which the law enforcement agency allegedly downplayed.

“I think the police need to be educated that when people talk about invasion of a home, they are not talking just about physical building, but they are talking about home as home, which includes the grass. No cattle people attacked me; that is a fact. I am here physically and I did not suffer any injury. That never happened. But my home was invaded by cattle.

“Why should the police go to such lengths as to suggest that I had nothing better to do than to go accosting cattle on the road? What is my business with cattle on the road? We drove them out of my property, together with my grounds men. In fact, they began the expulsion process. I then happened to be driving out, so I joined them in my vehicle, herding the cattle out of my premises.

“Once they were out of my property, that was when I arrested the cows. Why did I arrest them? On exiting my property, just outside my gate, I beckoned to the herdsman, I said: ‘Come over here. Haven’t I given you a warning before?’ He turned around and then proceeded walking along. So, I walked towards him and the next thing he went into the bush and disappeared, and his other assistant also disappeared.

“So, we were left with the cattle. I penned in the cattle by the roadside and called one of my grounds men to stand there with me and we kept the cattle there while I sent for the police to come and take over. That is the very simple, ordinary, commonsensical proceeding.

“Why should the police find it necessary to suggest that the cattle and the herdsmen were never on my property? What kind of nonsense? It is a distraction from more serious issues.

“I hate to be personally at the centre of issues, like this. I am more concerned with what is happening to students in Ondo, who are being waylaid by herdsmen, and being kidnapped. I am concerned with my people in Ogun State who are being butchered even while the governor is setting up a commission of enquiry. I wish to beg the police: please, don’t make an issue out of this. Don’t lie; then, I don’t need to come here and address anyone,” Soyinka said.

He also blamed members of Miyetti Allah Cattle Breeders Association of Nigeria (MACBAN) for most of the clashes between herders and their host communities.

The eminent writer stressed that their unguided utterances and boasts were responsible for people ascribing every crime perpetuated by herders to the Fulani.

Welcoming the idea of ranching, as unanimously agreed by the Northern Governors’ Forum (NGF), Soyinka urged Miyetti Allah to apologise to Nigerians and restitute as much as it is possible in order to begin to change the mindset of Nigerians about Herdsmen.