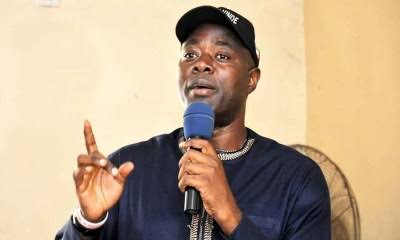 Makinde, through his Chief Press Secretary, Taiwo Adisa, said that the current insecurity across the country is triggered by President Muhammadu Buhari’s failure and administrative incompetence, stressing that Sunday Igboho, has no right to banish the fulanis from the pacesetter state.

Adisa said this while featuring on a programme titled ISSUES OF THE MOMENT on KING 103.9FM, to give updates on issues relating to governance in the state.

He spoke about the ultimatum given by Sunday Igboho, he said ultimatum could only be given by appropriate authority when there is an issue to be tackled.

He said,” The government is aware of the ultimatum given by Sunday Igboho and has already taken the matter up.

The government held security meeting with service commanders in the state to get to the root of the matter. The state government is on top of the game and reassured the Arewa community that no evil will befall them”.

“Oyo state under Gov Seyi Makinde will not allow some criminal elements to seize the forest of Oke Ogun, Ibarapa and other forests linking us with kwara and Benin Republic for their hideouts. The government reviews the situations around security on a daily basis”.

“And for the COVID-19 vaccines, I don’t think Nigeria as a country is ready for the vaccines because none of the States has the storage to store the vaccines but the federal government already procure to get a certain number and which 1,800 is allocated to Oyo state.

According to the manufacturers, two pills of the vaccines equals one full dosage and 1,800 are to be given to us in Oyo state that automatically means 900 vaccines are given to us judging by the calculation which is not enough to go round the health workers alone, not talk about the entire 7million population in Oyo state”.

“The first problem is the number of vaccines allocated to us and the other is storage, so the Oyo state task force already decided to procure the other vaccine that is coming up once it’s approved for human consumption.

The government has already given its commitment to procure the vaccines because it can be stored in the level we have in Nigeria, it does not have storage issue whatsoever”.

“The tactical teams are already working on it, we have some of the best brains we can rely on in the field of medicine and epidemiology to carry out the task”.

“And the way Amotekun is being treated by the news agency is uncalled for, the section of the media that report the operatives wrongly needs to be faulted because they did not get their fact right before publishing stories about Amotekun. And the essence of journalism is about the “right of facts”, you don’t push out half baked stories or fact, it will mislead the people”.

“We need to realise that Amotekun is just 6months old and it’s security agency not like other organization like NGO, Amotekun as an organization is meant to fight problems and it’s natural for the problems to fight back because criminals will always fight back.

But in the case of Amotekun, before it began its operation some people were already creating bad stories against them, some of which they claim it’s to create Oduduwa republic, meant to chase away other tribes from Yoruba land and so on, and those stories are wrong”.

“Two states had practically launched Amotekun, Ekiti state and Ondo state. Oyo was not the first to launch it, so why is it that it’s Oyo state having this issues? Some people are out there to paint Amotekun with bad names, they are only there to talk about the bad and not the good of the operatives. Although, I can’t say Amotekun is faultless, the killing of the 23years old in mokola was an error and those operatives involved are already paying for it. There are lots of bad blood in the security agency and we can’t because of that disband them”.

“I can tell you that it was only two mistakes at most that was committed by Amotekun operatives, the accidental discharge at Oyo was not fatal and the victim has recovered as I was told and the incident of mokola which was fatal. That will not repeat itself as the operatives found guilty are already being punished”.

“There is no overwhelming evidence for anyone to call a spade a spade, it’s just that the opposition party is jobless. The only way they think they can get people’s attention is to divert the attention of people from all the good Gov Seyi Makinde is doing, to create a sense of insecurity. That was the same logic they used against formal President, Good luck Jonathan.

We all know that insecurity is an issue all over the world and that’s why security is one of the four pillars of the government”.

“Concerning the State Polytechnic, they need to be advised, I mean the unionist among them to be wary of being corrupted by some elements that do not mean well for the state. For the Polytechnic to have money run the system, Gov Seyi Makinde allocated 300million to get some courses accredited and equip its laboratory.