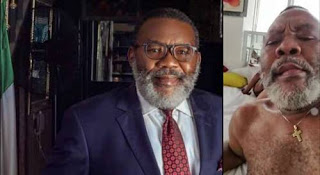 A leaked video has allegedly shown an appointee of Nigeria’s President, Muhammadu Buhari, Chief Willie Amadi, in a room with two girls making out love.

According to the video seen by SAHARAREPORTERS, Amadi, a lawyer and Federal Commissioner, Imo State Office of the Public Complaint Commission, was seen videoing himself in the 12-second sex tape which captured his image and those of the girls, in an amorous sex position.

It was gathered that the video first leaked on WhatsApp before it was later uploaded on YouTube last Saturday.

However, a search on Tuesday morning showed that YouTube had removed the video for having violated its ‘Terms of Service’.

Meanwhile, multiple calls put across to Willie Amadi were not answered as at press time.