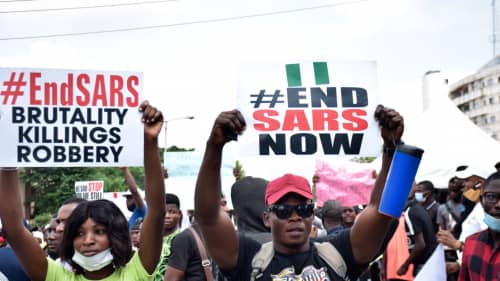 The resistance against the oppression and human rights abuse of mostly defenceless Nigerians by officers of the Nigeria Police special squad, known as SARS, came to a deafening crescendo this week. It was never a prophecy foretold. However, thanks to the young men and women who put up amazingly coordinated protests in major cities, the #EndSarsProtests hashtag trended and resonated in far-flung places. The movement has gathered momentum and it is imperative that it is kept going. If we sustain this social galvanising of our people against police brutality and intimidation, I foresee that it will be the precursor for successful engagements with those in power on the many more battles that lie ahead, and the manner in which we can crush those who would abuse us and our sensibilities, and even threaten our lives.

Scrapping SARS will not stop the menace as it is merely a fruit of a poisonous tree. All other fruits will be equally poisonous. The haste to fashion a unit termed SWAT is the misrepresentation of the demand of the protesters. A more fundamental reform of the police paradigm is needed. There is a global trend of police misconduct in the news now, but this is worse in Nigeria, the entire force is a cesspit of intertwined corruption-provoking practices and operational culture. What many Nigerians do not know is the extent of the corruption economy within the Nigerian Police.

I have researched policing in Nigeria, Africa and the world at large. It is clear to me that Nigerians do not fully understand the depth and scale of the challenges facing the police. It is not out place to be critical of them, they have not been set up to succeed but rather to fail. The constraints faced by the police are so enormous that effective policing is almost impossible unless there are changes. These constraints have metastasised into too many misconducts and unprofessional behaviour by many police officers. Despite attempts by the police institution to discipline and even sack officers that are reported (more of that has been happening recently), there is a never-ending pipeline of officers who perpetuate similar misbehaviour that replaces the sacked ones.

From recruitment, to training, to internal management, there are many challenges facing the Nigerian police. And until these challenges are addressed, any attempt to reform the police will be cosmetic approach and running around in circles. So, What are these Challenges?

HISTORICAL CHALLENGES – The way the Police has been emasculated historically by the military has stunted their capacity to be citizen-focused or respond to effectively manage crime and criminality rather the police is government-focused. Historical underfunding and neglect has caused a lot of damage.

INSTITUTIONAL CHALLENGES – Corporate culture and internal discipline. No independent complaints system. The Police Service Commission PSC has no independent capacity to investigate or police the police. Complaints against NPF officers to PSC end up being investigated by the NPF itself (though a party to the complaint), who then reports to PSC. This is unsatisfactory.

STRUCTURAL CHALLENGES – The way the police are organised does not promote community policing effectiveness. Commissioners of Police take instructions from IGP instead of Governors. The over-centralised structure of the police does not help it to connect with communities as it should.

OPERATIONAL CHALLENGES – Lack of adequate equipment and tools. Up to 40% of officers on personal guard duties. NPF does not have enough frontline officers because lots of them are on private security duties with VIPs and anyone that can afford to pay for their services. This creates operational difficulties for the core policing functions as there is scarcity of officers.

FINANCIAL CHALLENGES – not enough is being spent. We now have Policing by donating and corporate goodwill in Nigeria. Basic infrastructure and equipment does not exist in many police locations. For instance, most officers buy their own uniforms and allowances are paid very late if at all. It is not uncommon for DPOs to levy officers to raise funds for the burial of dead colleagues. Many officers are transferred to new states but provided no financial support to make this happen. Many end up sleeping on the floor at the police station until they are able to “raise” the money needed to rent a room. These avoidable difficulties promotes subsistence corruption throughout the police estate.

ENVIRONMENTAL CHALLENGES – Wider Criminal Justice slowness & poor public recognition. The wider criminal justice system is so badly managed that police officers have also become part of the problem. Proliferation of security outfits in Nigeria have also diluted the role of the police so much that people often get confused as to who to report certain crimes to. These disparate security agencies compete instead of cooperate. For example, all private security firms in Nigeria are licenced by the Civil Defence Corps and not the NPF and Billions are collected annually from these firms as registration fee by Civil Defence. Civil defence focuses on protecting its bread and butter first rather than share this information with the police in an automatic fashion. So how can the police be effective when facing these environmental challenges.

CAPACITY CHALLENGES – Ongoing Training and validation not widespread. Inadequate recruitment and initial training. The recruitment process into the police is so ineffective that it will be a miracle if we get any good officers in the future. Garbage in, is garbage out. You can finish a prison term for armed robbery in Aba today and join the police in Lagos tomorrow. If you do not declare your conviction; there is no way the police will know. NPF recruits contain all manner of criminals and criminally insane individuals that the training regime that could have weeded them out has also been compromised.

POLITICAL CHALLENGES – Too much political interference in policing in Nigeria. This demotivates good officers as political patronage becomes a basis for promotion and benefits. This political interference has also decimated the ranks of Specialist Officers in the NPF; who are often requested to become ADCs etc by Governors against NPF rules. Once the police losses such officers to politicians; they usually never come back to their hands-on specialist posts afterwards.

As with the wider Nigerian state; the problem we have with police reform is not lack of ideas but lack of will and courage to implement what is necessary. Below are just some of the many ideas I believe can help trigger a reform in the standard of policing in Nigeria.

• More funding for our police. Our police are poorly renumerated, a special salary structure outside the federal civil structure needs to be designed.

• Equip the Police. Our police needs to be properly equipped, this is why their is used as a tool of defence and offence on little provocation. A policeman wearing a knife protective vest will not immediately go for the gun in a situation where there is a knife threat.

•A minimum of yearly training program. More if needed. All officers must undertake yearly training. Our police officers are clearly poorly trained. There needs to be a total overhaul of the NPF’s training curriculum not only limited to developing muscles and fitness but also mental capacities that encourages intelligence lead policing and not police led intelligence approach. There should be periodic recertification of our officers on riffle handling.

•Introduction of three strikes you are out policy. Officers with three Upheld misconduct complaints within a 5yr period will face automatic dismissal.

•Change of working partners. Officers with complaint against them should be made to work with new colleagues as a matter of policy. This may involve changing the police division they are listed to.

•Psychological assessment of all officers after new postings or promotions. Treatment, training, restrictions of duty or dismissal should be recommended accordingly.

•Swift dispensation of investigations and punishment. A 21-day maximum timeline should be given for resolution of all complaints. Outcomes must be publicised to encourage public trust. As a matter of routine policy; All officers assigned to desk duty and disarmed after every complaint until investigation is completed.

•New Whistle Blowing policy needed. This should give protection to officers to report misconduct anonymously. The handling team for this policy should be made independent of the police. This may be outsourced.

•Every officer dismissed for Gross misconduct that led to a fatality must lose their pension in addition to dismissal and other punishments.

•Lying to investigators or planting of evidence should become an immediate sacking offences in the police. All officers must know that if they cannot be trusted to say the truth, they cannot remain in the NPF. Numbers of those dismissed in this category should be published periodically throughout the year.

•Any police officer found to be drunk on duty must face immediate dismissal. The threshold should be made known and the DPOs should be empowered to test all officers in his division if alcohol use is suspected. The breathalysers needed should be supplied by the Force HQ to all divisions.

•The widespread arming of police officers should end in Nigeria. An Armed Unit need to be created in every command. This will be better trained officers who will undergo yearly psychological evaluation and revalidation of their firearms skills. They can be called upon when needed by frontline officers. All other rank and file officers should be armed with Tasers and other non-lethal tools. This will reduce needless shooting and make those allowed to carry arms better trained and better prepared.

The key is Implementation. Where there is leadership will; there will always be progress. Strengthening the accountability of the police institution is of critical importance to effectively combat corruption and break the circle of impunity.

Beyond #ENDSARS struggle, there are still many bridges to cross. Nigeria has witnessed many inhumanity and human right abuses because we’ve failed to tackle the root causes of the problems that bedevils us.

I pray that this latest protest would metamorphose into a bigger struggle for an equitable society. I pray it would galvanise our people into electing the best of Nigerians and not the dregs of our people.

We should not move on after this relatively successful protest without planning for a better future. We should grab this opportunity that has presented itself on a plater of gold with both hands. We should use it judiciously and let it be a springboard for launching a new and better Nigeria. God help us.

2 thoughts on “#ENDSARS: A Struggle To Reform The Nigerian Police”