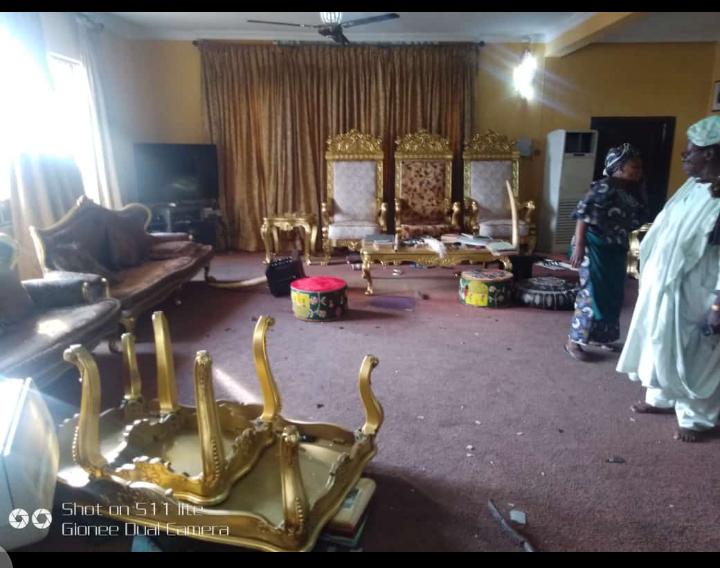 Angry youth on Sunday stormed Soun palace in a tattered cloths to protest the killing of Isiaka Jimoh who was shot dead during #ENDSARS protest in Ogbomoso.

Recall Mouthpiece NGR had on Saturday reported that the protest turned bloody and extremely violent with police firing teargas and other sophisticated weapons to disperse protesters.

According to reports, the angry protesters suspected to be “Italasa boys” throng the streets to burn scrap tyres and destroying properties in protest over the Saturday’s ugly incident.

An eyewitness who spoke to Mouthpiece NGR maintained that the youth are seriously angry and demanding for the name of police that shot Isiaka dead.

At the time of filling this reports, the angry mob are still burning tyres in Soun palace after destroying highly referred chairs in the palace.

Meanwhile, 5 Vans of Operation Burst has just arrived the Palace of Soun which to some may worsening the situation on ground.

The youth are seriously demanding loudly in Unison for Ayeni who they said gunned down Jimoh Isiaka.

Mouthpiece NGR reliably gathered that more than 7 people are currently receiving treatment in Bowen hospital. There are reports that two or three people were also shot dead but yet to be confirmed by this medium.