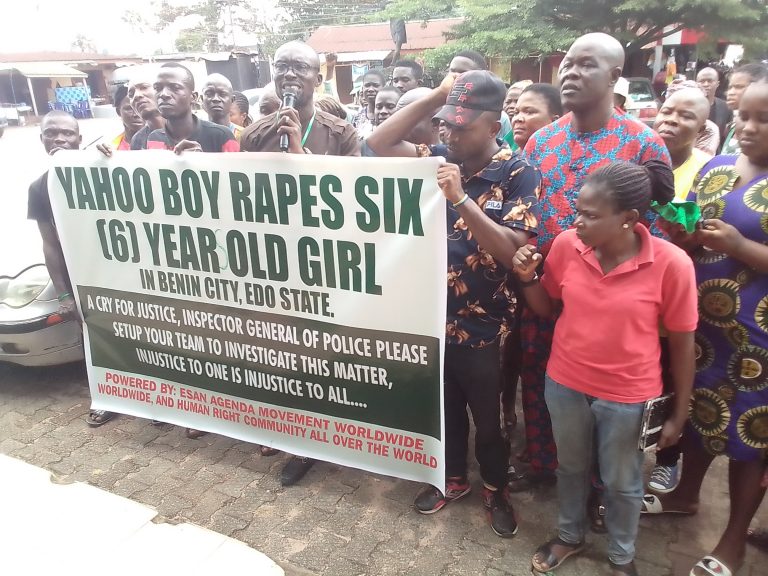 The incident, according to the father of the girl, Okehelem Oyenma, took place at Edobor Street, off Uwelu quarters, Egor local government area of Edo state.

Oyenma, who led protesters to the secretariat of the Nigeria Union of Journalists (NUJ), Edo Council in Benin on Monday, is demanding diligent prosecution of the suspects involved in the act.

He told journalists that the suspect was arrested at the scene of the crime with his native doctor who was preparing charms to give to his daughter when his daughter was bleeding profusely after the rape.

According to him, he became aware that all was not well with his daughter when he noticed that she was bleeding profusely from her private part.

He narrates: “He took my daughter through the backyard to his own house, bought her rice and egg.

“My daughter told me that after feeding her, he pulled her pant, puts his fingers and after that, he inserted his penis.

“After that, my daughter started bleeding seriously.

“Because of the curfew, the vigilance group assisted me and my wife to look for my daughter that night, not knowing that she was with this Destiny Obiyan in his house.

“She told me that after he finished raping her, he asked her if she can find her way back home. We wanted her to take us to the house of the rapist that night but she said she can’t locate the house that night.

“So the following day, I asked her to take her mother to the rapist house while I went to the Textile Mill police station to lay up the complain.

“So when myself and the police got to Obiyan’s house, we met him and his native doctor with his charms inside his palour.

“According to the native doctor, they have already gone to buy drugs for my daughter to stop her bleeding.

“On the floor were an handkerchief stained with her blood and some other charms were on the floor.

“The police arrested the boy and the native doctor.

“The rapist said he sent two persons, a boy and a young lady to buy the drugs and that they spent N2,000 for the drugs.”

He said the test conducted on her, showed that she was defiled.

“The test results from the police clinic and from the government hospital have shown that there were penetrations,” the distraught father said.

He called on the police to investigate and ensure that his daughter gets justice.