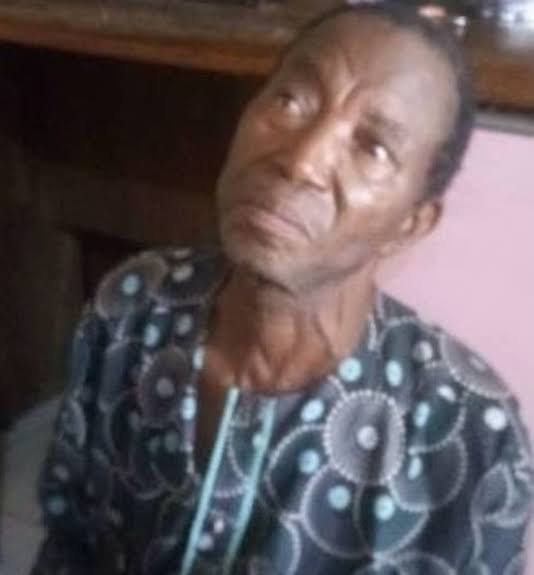 67-year old James Olajoyetan was arrested by Police operatives for allegedly defiling a 12-year-old girl who came to spend the recently marked Sallah with her visually impaired grandfather in Ejigbo area of Lagos State.

The suspect, a commercial tricycle operator, was alleged to have defiled the girl four times since she came visiting. It was gathered that one of the occasions was in her grandfather’s one-room apartment. He was alleged to have gagged her mouth to prevent her from shouting in order not to alert her blind grandfather.

However, at the weekend, Olajoyetan, a widower, was said to have called the girl, pretending to send her on an errand.

Explaining her ordeal, the victim said: “When I went, I stood in front of his door. He told me to come inside to collect the money. When I did, he shut the door and raped me. While he was doing it, I wanted to shout but he hit me several times and covered my mouth.”

A neighbour said to be returning from a journey was alerted by the girl’s cry. Out of curiosity, he peeped through the window, forced the door open, and caught Olajoyetan in the act. He raised the alarm that alerted residents who rushed to the apartment and handed the suspect to the police at Ejigbo division.

During interrogation, the suspect claimed he was under a spell. He said: “I had a disagreement with a pastor in Christ Apostolic Church, Kajola. He accused me of being instrumental to his leaving the church. Six months ago, he boasted that he would place a spiritual load on my head and ensure I was publicly disgraced.

“Since then, I didn’t know what came over me. They claimed I raped the girl four times, but it was only once. My wife died in 2005. I have six children, the first is 35 years old while the last is 17 years. I am still shocked that I could lay with a child that is much younger than my last child. When she came in, I gave her N100 and she hugged me. At that point, I lost my sense of judgement.”