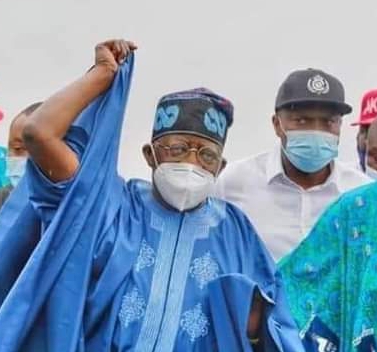 The Ondo state chapter of the People’s Democratic Party(PDP) has criticised a National leader of the Ruling All Progressives Congress(APC) and former Governor of Lagos, Asiwaju Bola Tinubu over his comments about the Party at an event in the state on Saturday.

Tinubu had described the leading opposition party as a dad Party, urging the APC members at the Commissioning ceremony of the newly built revenue office of the state to nail it’s coffin by voting for the continuity of the governor Akeredolu led government in the October 10 election.

Reacting to the statement, the PDP state PRO, Mr. Kennedy Ikantu Peretei in a statement made available to Mouthpiece NGR on Sunday said Tinubu’s claim is laughable because it can only come out from the mouth of a day dreamer.

He said Senator Bola Ahmed Tinubu while Commissioning the sole Project of Rotimi Akeredolu in Akure (Revenue House) said the PDP is dead. This claim is laughable because it can only come out from the mouth of a day dreamer.”

“The much hyped Flag off of the Akeredolu Campaign was apparently rejected not only by Ondo people but even the forces of nature that brought about torrential rainfall. Ironically, Tinubu and his hired crowd from Osun and Ekiti States symbolically took solace in umbrellas that dotted the entire Campaign ground.”

“Only last year, the PDP defeated the Buhari led APC roundly at the Presidential elections. The PDP also won two out of the three Senatorial Seats in Ondo State. How can such a party by any stretch of imagination be said to be dead?”

“It is shameful that the only project Tinubu came to Commission in three and half years is the Revenue House a building that stands as a sign post of multiple taxation of the Ondo State people 10% of which goes directly to the pocket of Akeredolu’s son.”

“The PDP is offering affordable education and health care delivery as against Aketi engineered astronomical tuition fees that have thrown many of the students in tertiary institutions out of school.”

“By October 10, Tinubu will know which Party is dead in Ondo State.” He added.