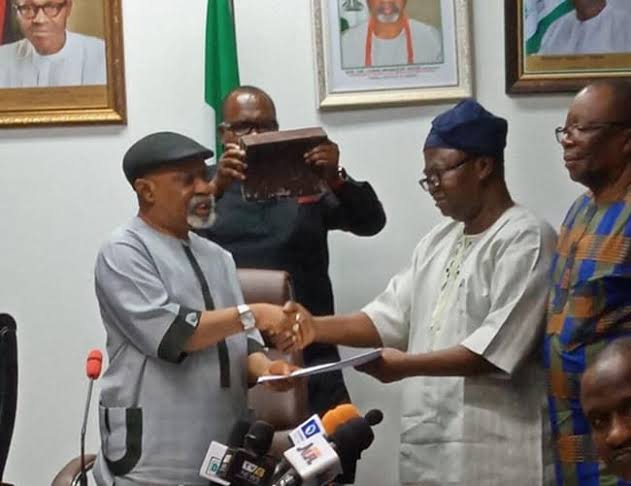 The Minister of Labour and Employment, Dr Chris Ngige, said the Academic Staff Union of Universities would soon suspend its strike.

Ngige gave the hint during an interview on Channels Television’s Politics Today aired Tuesday evening and monitored by Mouthpiece NGR.

The minister explained that the Ministries of Finance, Education, Labour and Employment and the Office of the Accountant General of the Federation will meet with ASUU to resolve the disagreement on the controversial Integrated Payroll and Personnel Information System.

Mouthpiece NGR understands that the Union is asking the Federal Government to honor 2019 agreement.

But Ngige said the FG was ready for an integrity test of the University Transparency and Accountability Solution developed as an alternative to IPPIS by the varsity lecturers.

He noted that FG would consider the UTAS if it addresses the shortcomings identified in IPPIS.

He said, “The issue of ASUU will soon come to an end. Two reasons – ASUU have called the Federal Government, represented by Finance and the Accountant-General Office and their direct employers, the Ministry of Education to come for the test.

“We are ready to do that. After the independence day celebration, the four ministries and agencies involved will gather together with ASUU. We will look at the UTAS. If there are shortcomings with IPPIS as complained which UTAS have corrected. What’s wrong about it? It is software, we will look at it.

“Secondly, ASUU members have been collecting their money since COVID-19 came and I wrote a memo to Mr president that ASUU members are still Nigerians. Even the members, have families that they care for. By upper week, we are going to arrange for this demonstration.”

ASUU had rejected IPPIS, insisting that it violates university autonomy and proposed the UTAS as an alternative.

President of the union, Prof. Biodun Ogunyemi, earlier explained that there was nowhere in the world where IPPIS is being implemented that universities are put under the civil service.

He said if Nigeria wanted to have 21st-century universities, with global ranking, it cannot be achieved through IPPIS.

“IPPIS will bring universities under direct civil service control and the system does not work that way.

“That kind of system will kill innovation, will kill creativity and it will kill academic freedom and autonomy.”

Reacting, ASUU in a statement obtained by Mouthpiece NGR on Wednesday accused the Minister of Labour and Employment, Dr Chris Ngige of spreading falsehood on a TV station about the latest as regards its face-off with the federal government.

The Lagos Zone coordinator of ASUU and lecturer at the Federal University of Agriculture Abeokuta (FUNAAB), Prof Olusiji Sowande said the Union would not call off its ongoing indefinite industrial action (strike) until the federal government yielded to its demands.

According to him, ASUU came out with this development by putting the record straight as a reaction to a comment made by Dr Nigige on a live television programme on Tuesday about the lingering crisis with ASUU.

He said the minister misinformed the public by narrowing down the issues in contention between the federal government and ASUU to the rejection by the latter of the Integrated Personnel and Payroll Information System (IPPIS).

“So many other issues are there unsolved listing them to non-fully implementation of their 2009 agreement and that of February 2019 Memorandum of Action, non-payment of outstanding Earned Academic Allowances, non-conclusion of the renegotiation of 2009 FGN-ASUU Agreement and non-setting up of visitation panels to federal universities as well as the proliferation of state universities.”

“The claim by the minister that government had paid salaries of ASUU’s members up to date was not true as the correct position is that their salaries were paid up to June while in some cases not up to that month.”

“The government had withheld their February to June 2020 check-off dues deducted from their salaries.”

He said it is disappointing that the minister could go on air to present information he had not verified to be true to the public.

Sowande, therefore, re-emphasised that the union would continue its ongoing strike as long as the minister of labour continues to engage in propaganda and spread of falsehood against ASUU.

He, however, urged well-meaning Nigerians and lovers of quality education to prevail on the federal government to do the needful in order to restore normalcy to public universities.