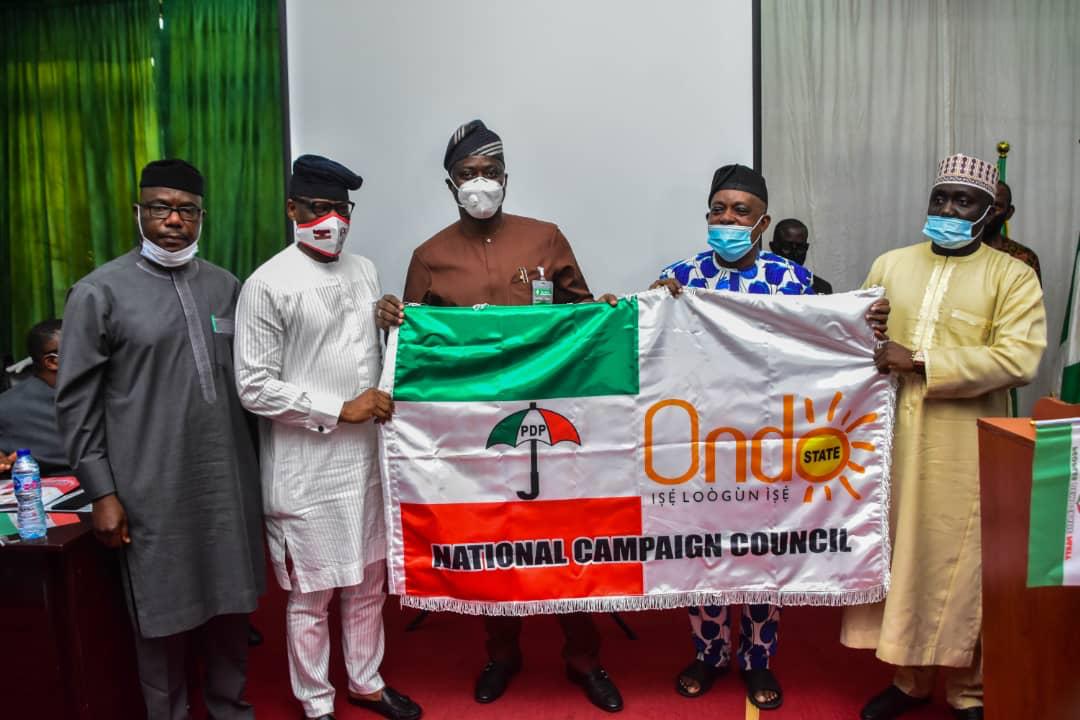 Being the speech of His Excellency, Seyi Makinde, the Executive Governor of Oyo State, at the Inauguration of the PDP National Campaign Council for Ondo State Gubernatorial Elections on Friday, August 28, 2020

Thank you for naming me the Chairman of the People’s Democratic Party’s National Campaign Council for the October 10 governorship election in Ondo State.

It is indeed a privilege to be working with other members of this 145-member council to deliver Ondo State to our great party, the PDP.

One of our responsibilities is to make sure that we go into the election united. We are doing everything possible to make sure all PDP leaders and members in Ondo are on the same page. With the unity of purpose, victory is already assured.

I have no doubts that Ondo State will soon come under the umbrella of the PDP.

When you have a superior offering, you are not afraid of the competition or how long the customers have been using their product. You focus on highlighting how your offering is better. You show people the desirable features, and they will buy into it. This is exactly what I was told when I campaigned in 2018/2019, and that is what we did in Oyo State.

This is why I am confident. We have the right team to wrestle power out of the hands of the incumbent. And we are committed to ensuring that we get the right outcomes.

Elections are all about choices. And the people of Ondo State must come out on October 10 to make the right choice.

A choice between stagnation and progress.

A choice between sustained poverty and economic recovery.

A choice between exploitation and development.

A choice between continued hardship and prosperity.

Our great party, the PDP, is presenting the people of Ondo State the right choice in Mr Eyitayo Jegede (SAN) and his running mate, Honourable Gboluga Ikengboju.

With these two on the ballot, the people of Ondo State can be sure that the state will get back on the right path.

Once again, Ondo State will enjoy the Sunshine.

They have said no party in Ondo can defeat APC. Well, this is not the first time we are hearing that, is it?

We also know that after they said it the other time, they were defeated roundly. It will take work, but we are up to the task. By God’s grace and with the great people of Ondo State on our side, Victory for the PDP is certain.

Let us serve the ruling party in Ondo State notice. PDP is coming. We have noticed desperate attempts to undermine peace in Ondo and we condemn these in strong terms.

PDP is a peace-loving party. We believe in the superiority of the people and the ballot and not brute and violent struggle for electoral victory.

As we all know, there can be no peace without justice and equity. Therefore, we demand strongly that all federal agencies playing any role in the Ondo election must be neutral and non-partisan.

We insist that INEC must provide a level playing field. At the same time, the security agents must play their constitutional roles without undue interference or favouritism towards the ruling party or any other party.

A word for Ondo State people: A new dawn is on the horizon. In a few weeks, it will be time to take action and take their destinies into their hands by voting the PDP Candidates, Mr Eyitayo Jegede (SAN) and Honourable Gboluga Ikengboju for meaningful development and rapid progress.