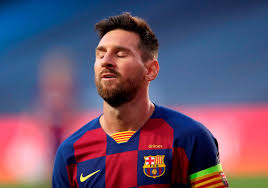 Angry FC Barcelona fans chanted for the resignation of club president Josep Maria Bartomeu after captain Lionel Messi announced on Tuesday that he wished to leave the Catalan side .
“We love you, Messi stay , Messi stay!” and “Bartomeu resign !” chanted several hundred fans outside FC Barcelona ’ s Camp Nou stadium on Tuesday night .
“I am very upset , for me Barca is Messi and Messi is Barca . They are the same , he is the symbol of Barca … They should erect a monument in Camp Nou .

“I don ’ t think this ( departure ) should be allowed to happen , ” 80- year -old Joana Polo, wearing an FC Barcelona face mask , told Reuters on Wednesday outside Camp Nou .
The decision by the Argentine forward has thrown the club into turmoil less than two weeks after their humiliating 8- 2 UEFA Champions League defeat by Bayern Munich . “It ’ s a huge outrage . I never thought this would ever happen … You can take defeats in sports but I can ’ t handle Messi leaving , ” said Oriol , 40.

“We will defend him until death . He is not the one to blame . The blame is on ( FC Barcelona ’ s ) board . ”
“Total War !” daily newspaper Sport declared on its front page referring to the situation . Messi has been named world ’ s best player of the year a record six times , but he has grown increasingly unhappy over the last 12 months . His grouse is on how the club is being run under Bartomeu .

He criticised club officials for forcing players to take a pay cut to cope with the financial hit of the coronavirus pandemic .
Albert , 28, another disgruntled Barca fan , told Reuters : “ They have been doing things badly for a long time and this guy ( Messi ) has got tired of not having a project , of not keeping the philosophy we used to have … and he said ` enough is enough ’ . ”
“The only situation available right now is for him ( Bartomeu ) to resign . ” After Barca surrendered the Spanish La Liga title to Real Madrid in July , Messi slammed the team as “ weak ” and “vulnerable ” during an uncharacteristically fiery post-match interview .

Barca are in the midst of overhauling their squad following the UEFA Champions League defeat .
Some Spanish media have reported that new coach Ronald Koeman told Messi ’ s close friend and strike partner , Luis Suarez , that he does not wish the Uruguayan to stay at the club.

One thought on “No Barcelona without Messi, angry fans tell club”