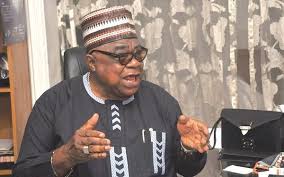 A former governor of Oyo State, Adebayo Alao-Akala, on Saturday, said he would not contest any future gubernatorial elections in the state.

Otunba Alao-Akala, a former police officer, was the governor of the state between 2007 and 2011.

He sought re-election for a second term in office in 2011 but lost to the immediate past governor, late Abiola Ajimobi.

Otunba Alao-Akala contested again in 2015 and lost to Mr Ajimobi. In 2019, he lost the All Progressives Congress (APC) ticket to Adebayo Adelabu who lost the main election to Seyi Makinde.

The former governor has, however, declared that he is done contesting gubernatorial elections in the state.

He made this announcement while speaking on a radio programme, ‘Bosenlo’ on Lagelu FM 96.3 in Ibadan on Saturday, which was monitored by MouthPieceNGR

“I am no longer interested in the governorship race in 2023, therefore, I am competent to talk to all the aspirants. All our aspirants are very competent but they should continue to pray for God’s guidance.

“I can use my own (money) to encourage our people because I didn’t have money when I became a governor.

Otunba Alao-Akala, who heads the APC reconciliation committee in the state, also said he will ensure a credible candidate emerges for the party in 2023.

He said his decision to step aside for the governorship election will make it possible for him to carry out the reconciliation task bestowed on him by the late former governor of the state, Abiola Ajimobi, without fear or favour.

He said the reason aspirants leave a political party is when they discover that the leadership of such a party cheats them by imposing candidates on them. He said this would be prevented in 2023.

“My discussion with the former governor Abiola Ajimobi was lengthy, but for our party, we agreed that since he had been given an appointment in Abuja, I should wait behind to reconcile aggrieved members of our party in the state.

“Some people were aggrieved after the last general elections. Ajimobi knew I was experienced and I could bring them together with my experience.

“I have spoken with all the blocs in the APC and they are ready to return to the party. I begged some of them. I made sacrifices to some. We are all stakeholders in our party, since it is not a company belonging to someone, so we should work in unity.”