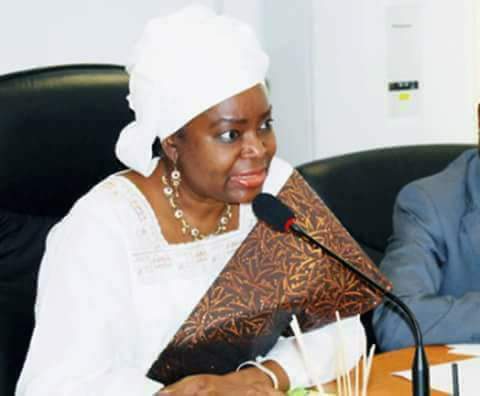 In a statement personally signed and made available to Mouthpiece NGR, Gabriel described Akinjide as a futuristic leader whose commitment to Nigerian nationhood can not be overemphasized.

According to him, Akinjide is one of the best leader anyone could ask for. She has been a role model and an example of selfless giving to this generation. She is a mother and someone worthy of emulation.

Oloye Akinjide who was born on the 4th August, 1959, had her primary and secondary education between 1963 & 1974 at Maryhill Convent School & St Louis Grammar School, both at Ibadan, Oyo State of Nigeria respectively.

She left Nigeria for the United Kingdom (UK), where she attended Kings College, London, University of London and bagged in 1980 a Bachelor of Laws (LLB) with 2nd Class Upper. She also attended Harvard Law School and in 1981 bagged a Master of Laws (LLM). She was at the Nigerian Law School, Lagos where she was called to the Nigerian Bar (BL) in 1982.

Akinjide has had varying work experience in both the public and private sector. She was the Special Assistant to Mr. President (SAP) on FCT Matters (2001-2002) & SAP on G77 and Nigerians In the Diaspora Organisation (NIDO) – 2002 to 2003.

She was a Principal Partner to NEWMAN LEGAL – a Law firm based in Lagos & Abuja and the former Managing Partner of Akinjide & Co. where she was Joint Head of the Energy Law Dept. and the Head of Company Law Department. She was also the Chairperson, Local Organising Committee, Association of International Petroleum Explorationists (AIPN), West Africa Chapter.

The Chief of Staff to Oyo speaker stated further that Akinjide contributed immensely to the development of satellite towns and area councils while as minister of FCT.

He concluded by praying that the almighty God will grant her longer life, good health and strength to keep serving the nation and the continent.”