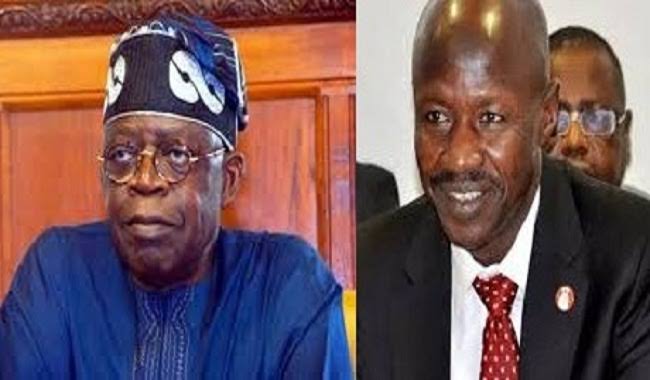 Bola Tinubu, the National Leader of All Progressives Congress, (APC) is currently battling to save the suspended acting Chairman of the Economic and Financial Crimes Commission, Ibrahim Magu.

Mouthpiece NGR learnt the APC chieftain has also mounted pressure on retired Justice Ayo Salami, Chairman of the presidential probe panel to exonerate Ibrahim Magu on the allegations leveled against him.

President Muhammadu Buhari had on Tuesday approved the suspension of Magu, from office. It was gathered that Magu was suspended to allow for probe into allegations against him.

The suspension came a day after he was invited to face the Rtd Justice Ayo Salami led probe panel, on various allegations against him, which borders on misconduct and financial irregularities.

The latest development is that Justice Salami, a long time ally of the strongman of Lagos Politics, Bola Tinubu, is being pressured by the latter to exonerate the suspended EFCC Boss.

Justice Salami, a native of Kwara state was nine years ago controversially removed as President of the Court of Appeal by President Goodluck Jonathan’s government.

He was suspended following his alleged disclosure to the media of an attempt by the then Chief Justice of Nigeria, Aloysius Katsina-Alu, to influence the decision of the Appeal Court, in a Sokoto governorship election matter pending before the court at the time.

Based on the recommendations of a Justice Ibrahim Auta-led panel which investigated petitions against Messrs. Salami and Katsina-Alu respectively, the former was found guilty.

Mr. Salami was accused of lying on oath against the then CJN and asked to apologise to Mr. Katsina-Alu within seven days. The panel’s recommendation was received by the NJC on August 9, 2011.

Mr. Salami approached the Federal High Court to challenge the recommendations of the panel

While that matter was pending in court, the NJC held an emergency meeting on August 18, and suspended Mr. Salami. He was immediately replaced with an acting appeal court president, Dalhatu Adamu.

The removal it was later revealed was connected with the discovery of unholy alliances with Bola Tinubu who was then preparing for a party merger ahead of 2015 general elections. Despite Justice Salami’s removal , his relationship with Tinubu has been smooth and untappered.

With the appointment of Justice Salami to head the president’s probe panel, Tinubu has switched back to the former court of appeal President for help on Magu.

According to reliable sources in the EFCC, Tinubu is fighting political battles by proxy using the EFCC Chief.

A source noted that “should Tinubu lose Magu as he lost the former APC national chairman, Adams Oshiomhole, he would be driving closer to end of his political career, hence the need to save Magu at all cost from dismissal ”

The source revealed that aside Justice Salami, Tinubu has equally reached out to some of President Buhari’s men and made a strong case for Magu

Another reliable source revealed how a member of the probe panel complained of Salami’s body language which is geared towards exonerating Magu by all means. The source stated that mouth watering promises were made to some of the panel members, adding that it has been confirmed not to be unconnected with Tinubu

According to “Nigeria Daily”, Magu’s suspension despite its lawfulness was a rude shock to the panel and Tinubu as there was no such recommendation from the panel to the president.

Salami on the advice of Tinubu had instructed a member of the panel , Femi Odekunle to make a bold statement through the media exonerating Magu before the panel submits it’s report.

Femi Odekunle another loyal ally of Tinubu, whose son is reported to be a staff of the EFCC and working closely with Magu went all out and accused Malami of waging a grudge war against Magu.

According to him, “the suspended EFCC chief is a victim of a power-play at the presidency.”

But in a deceptive turn around, the presidential panel disclaimed the statement, saying Odekunle only spoke for himself.

However, the Presidency has in reaction to the probe of Magu, declared that it shows that nobody under the administration of President Muhammadu Buhari is above scrutiny.

”A monitored report suggests that the investigation of the EFCC boss was to reinforce that this administration’s commitment to transparency and accountability, adding that the holder of such office must be above suspicion.

“A monitored report states that the interrogation of Magu is to give him the opportunity to clear himself of the weighty allegations against him.”

Recall that the Department of State Services (DSS), on Monday said that contrary to claims in the media that the EFCC boss was arrested, he was only invited by a presidential panel that was set up to review the activities of the EFCC.

According to the DSS, he was served the invitation to the panel, while on his way to the Force Headquarters, Abuja for a meeting, so he was neither arrested nor forced to honour the invitation.

In 2016, the senate declined to confirm the appointment of Magu over a Department of State Services (DSS) report which indicted him of corruption.