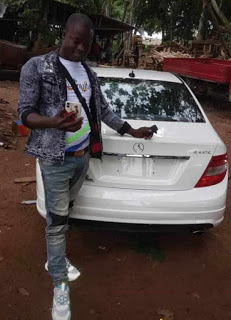 Moments after popular SARS officer bought a car, Nigerians especially some LAUTECH students are asking police to investigate him.

Nigerians have been calling out Mr Saheed after he showed off his brand new Mercedes Benz worth millions of naira. They also asked the police to investigate his source of income and confirm if he is capable of buying such car.

Mouthpiece NGR gathered that this happened after a man who run a parody account similar to the police force posted his pictures and alleged that the officer use to exploit LAUTECH students, he also urged his fans to ask the police to investigate the SARS officer.

In a contrary opinion, an ex-student of the institution identified as Freedom Samson Siasia challenge any LAUTECH student to come out and testify against the man if they have any genuine fact.

He said: “Let any first LAUTECH Student or Ex-Student come out publicly and support the claimed made on social media by one Parody that this SARS Officer, SAHEED has exploits him/her before.”

“I have know him as far back as 2016 at Wazobia as a fine and correct surveillance officer. He is one of the hand that reduce crime rate in LAUTECH and its environs.”

“Investigating his source of income is non of my concern because am not his employee, I only have interest in that single LAUTECH student that will testify to the claim of Parody.”

The post went viral minutes after he posted it.