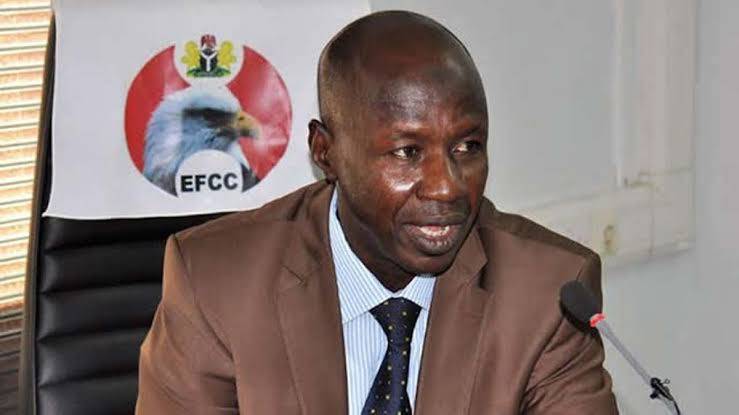 The suspended Acting Chairman of the Economic and Financial Crimes Commission (EFCC) Ibrahim Magu, has claimed that some powerful toes he stepped on while doing his job were out to tarnish his image and destroy his reputation.

He told the Presidential Committee On Audit of Recovered Assets, PCARA, that suspects and other criminal elements he prosecuted were after him.

Magu’s claims were contained in a response he addressed to the PCARA probing the mismanagement and lack of transparency in managing recovered assets by the anti-corruption agency in the last 5 years.

Magu denied any wrongdoing while in office, insisting that all he did was fight corruption to a standstill in the country.

He said his traducers were out there publishing false information about him on social media platforms.

Minister of Justice and Attorney-General of the Federation (AGF), Abubakar Malami, had in the petition he submitted to the PCARA claimed that the lack of proper record keeping and discrepancies in the recovery figures, was a dent on the anti-corruption drive as well as raising integrity issues that can lead to loss of public confidence.

Responding to this, Magu, told the panel that, “In the exercise of my official functions as acting chairman of the Commission, I have stepped on toes in ensuring that corruption is fought to a standstill in Nigeria.

“Some of the suspects under investigation and prosecution are always ganging up to fight me back, publishing false, untrue, malicious and libellous allegations against me. I have never abused the office I am occupying at the pleasure of Mr. President.”

“I have never personally enriched myself whilst performing my official function. I challenge my accusers to produce any evidence of this purported personal enrichment”.

“I unequivocally deny these allegations as same are untrue and merely calculated to tarnish my name, that of the Commission, and the giant strides this administration has recorded in the fight against corruption and recovery of the proceeds of corruption,” he stated.

“I am innocent. I have served my country to the best of my abilities with all sense of responsibility and integrity,” Magu insisted.

“I respectfully invite the panel to note the stellar and unprecedented achievements of the EFCC under my watch as the acting Chairman,” he said