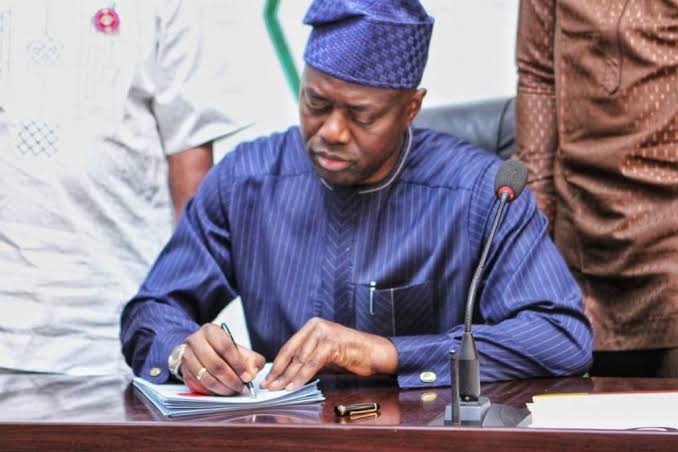 The appointment of Dr. Samuel Ogundiran as the Chairman of the Governing Council of the Ibarapa Polytechnic, Eruwa (now Adeseun Ogundoyin Polytechnic) is already raising dust in the school community for alleged financial misappropriation.

Ogundiran, a former Governing Council Chairman of the institution under Ajimobi led administration was arrested by the anti-graft agency in Ibadan, the State capital on Tuesday, May 28, 2019.

His arrest followed a petition forwarded to the EFCC for allegedly approving and paying furniture allowances to members of the Council.

Mouthpiece NGR gathered that the commission had earlier invited the council members for interrogations which they declined until they were forcefully arrested.

A highly placed staff of the Polytechnic confirmed to Mouthpiece NGR that the arrest was made few hours after the immediate past Governor of the State, late Senator Abiola Ajimobi completed his second tenure in office as Governor.

The source said, “Ogundiran alongside other members were taken to Iyaganku office of the anti-graft agency during their council meeting for investigation.”

A confidential document forwarded to Governor Seyi Makinde and sighted by Mouthpiece NGR on Friday indicated that an administrative lapses was uncovered under the watch of Dr Samuel Ogundiran in 2019 and which prompted the setting up of visitation panel of inquiry to investigate the internal wrangling in the institution.

According to the document, white paper reports of the visitation panel to ADESEUN POLYTECHNIC, ERUWA confirmed that Dr Samuel Ogundiran and other members as the governing council chairman collected over payment of allowances.

On page 5 of the white paper report and committee’s recommendation, precisely, recommendations 27 and 28, members of the governing council then which had Dr Samuel Ogundiran as the council chairman collected over payment allowances.

Recommendation 27 goes thus: “The officers responsible for the over payment of allowances to members of the governing council be surcharged accordingly.”

A source who spoke in confidence to Mouthpiece NGR disclosed that an interim management was set up after the former management team led by Mr Iyiola Rasheed Eyitayo as the Rector of the institution, were asked to proceed on accumulated leave.

He said: Dr Ogundiran who had collected his allowances while Eyitayo was in office, also collected another allowances for no reason during the tenure of the interim management team led by Mr Peter Adejumo.

On page 6 of the white paper report and recommendations, it says; “Since the issue raised in Mr Eyitayo’s lawyer’s petition to Economic and Financial Crimes Commission (EFCC) is still pending and under investigation, the state Governor should await the outcome of the investigation.”

Our source wondered why the officers involved are not being made to step aside for justice to take its course rather than reappointing such man to encourage fraudulent acts.

“Under normal circumstances, Dr Oguniran was the chairman of the governing council during the crises that rocked the institution, and if an office is under investigation, the officers should be accountable,” he added.