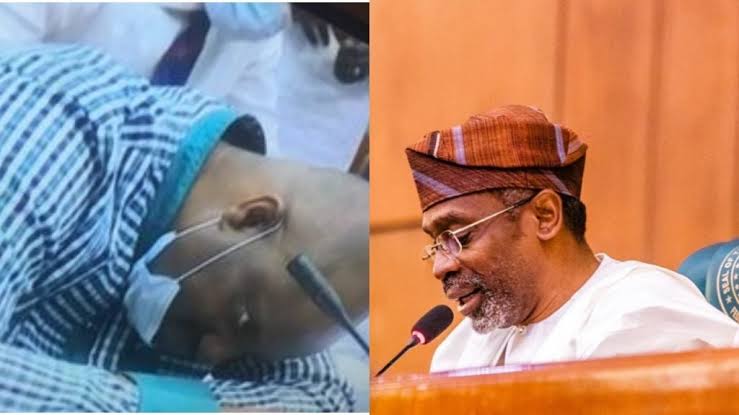 Godswill Akpabio, the Former Governor of Akwa Ibom State and the Minister of Niger Delta Affairs has released the list of lawmakers involved in the alleged looting of funds from the Niger Delta Development Commission (NDDC).

Mouthpiece NGR recalls Akpabio had forwarded a letter to the National Assembly where he noted that he did not accuse the lawmakers of receiving 60 per cent of the contracts for NDDC.

However, the part where the minister stated the names were not read on the floor of the house but were in the letter forwarded by the minister to the National Assembly.

The National Youth Council of Nigeria who released the document to the public in Abuja on Sunday expressed disappointment that the Speaker of the House of Representatives, Femi Gbajabiamila, refused to disclose the list of federal lawmakers who benefitted from the contracts awarded by the (NDDC).

“Other lawmakers that Akpabio listed projects against are, Senator Mathew Urhoghide (6), James Manager (6), Sam Anyanwu (19), and others simply identified as Ondo and Edo reps.”

The President of the council, Solomon Adodo, while speaking with newsmen on Sunday said, “Mr Speaker did not do us justice when he did not disclose to the National Assembly that the list of the beneficiaries he demanded had been disclosed and attached to the letter sent to him.”

“Gbajabiamila’s decision to cover up his colleagues is unfair to the fight against corruption, quest for transparency, and to the commonwealth of our nation.”

“We, therefore, urge Mr Speaker, Femi Gbajabiamila, to resign for covering up for a set of people who had erred and breached the rules of the contract.”

“All the National Assembly members who benefitted from the contracts without executing them should be prosecuted to serve as a deterrent to those who may want to follow a similar path.”

“It is a clear case of organised crime to have individuals who benefitted from illegality now rising to probe the fact that their illegality is being exposed.”

We call on all the anti-graft agencies and security agencies to, in line with the directive of President Muhammadu Buhari, immediately proceed and go ahead with their investigation of the matter.”

The group noted that they are in full support of the forensic audit instituted by the Ministry of Niger Delta Affairs because it had exposed those who had benefitted in the corruption that had festered in the NDDC.

In the document displayed by the Youths Council, Akpabio was quoted as having said that his letter became necessary because “the investigating Committee on NDDC refused and/or neglected to give me the opportunity to explain that reference to most NDDC contracts yearly being awarded since 2001 from the records allegedly to members of the National Assembly in both Chambers were done without the knowledge of the alleged beneficiaries.”

“However, the two chairmen of the Committees in both Chambers had adequate knowledge,” Akpabio reportedly stated.

Akpabio’s letter as released by the Youth Council further read: “To show you some typical examples, herewith attached are documents showing nature of contracts amount of such contracts (in some cases), date of awards and beneficiaries some were awarded to the two chairmen of both committees in the House of Representatives and the Senate, respectively, serving at the period of the awards (Annexures ‘B’, ‘C’ and ‘D’).”

The council condemned the Minister for sending the letter to the National Assembly and not making the document forwarded to the house public.

The contracts were mainly for road construction, reconstruction rehabilitation within the nine Niger Delta States.

Akpabio letter which was also copied to the Attorney-General of the Federation and Minister of Justice, Abubakar Malami, read in part: “May I extend to Mr Speaker the compliments of my office and those of the staff of the Ministry of Niger Delta Affairs.”

“I refer to the resolution of the House passed on the 21st July 2020 and forwarded to me on the same day Ref.NASS/HR/LEG/3/36/VOL.ll/O8 directing me to respond to the contents therein within 48″

“The investigating Committee on NDDC refused and/or neglected to give me the opportunity to explain that reference to most NDDC contracts yearly being awarded since 2001 from the records allegedly to members of the National Assembly in both Chambers were done without the knowledge of the alleged beneficiaries. However, the two chairmen of the Committees in both Chambers had adequate knowledge.”

“I never referred to members of the 9th National Assembly as beneficiaries of NDDC contracts as NDDC is yet to fully implement any NDDC budget since the commencement of the 9th National Assembly. In fact. the 2019 budget passed in February and harmonised between the 4th and 5th of March 2020 was received by the Commission in the middle of April, 2020, when same was designated to expire on the 31st of May, 2020.”

However, it is pertinent to point out that the Clerk of the National Assembly forwarded a letter Ref. NASS/CNA/115/VOL.38/1175, dated 20th March 2020, without attaching the budget details indicating that the 2020 budget of the NDDC passed into Law was being forwarded (copy of the letter is attached as Annexure ‘A’). This anomaly was brought to the attention of the Senate Ad Hoc Committee investigating a purported financial recklessness by the management of the commission in July 2020, though the first outcry was on allegation of missing N40bn which was totally untrue.”

“It has always been known that the two chairmen of the committees on NDDC in both chambers yearly exhibit unusual influence to the exclusion of committee members and even the management of the NDDC in appropriating funds to details embellished in the budget after the passage of line items at the plenaries. In the 2019 budget, the Executive Director Projects forwarded to me the attached list of 19 Nos. old contracts amounting to almost N9bn after tax, that the House of Representatives Committee Chairman on NDDC, Honourable Tunji-Ojo, insisted the IMC of NDDC must pay before 2019 budget details could be released to the commission (see Annexure ‘A1’).”

“To show you some typical examples, herewith attached are documents showing nature of contracts amount of such contracts (in some cases), date of awards and beneficiaries some were awarded to the two chairmen of both committees in the House of Representatives and the Senate, respectively, serving at the period of the awards (Annexures ‘B’, ‘C’ and ‘D’). However, due to the 48 hours notice, the forensic auditors could not sift through the thousands of files in their possession to provide more.”

“The above explanation would have been made if the investigating committee did not shut me out from responding to the abuses on me by the lady representative called Boma.”

“May I assure Mr Speaker that as a former Minority Leader of the 8th Senate of the Federal Republic of Nigeria. I shall forever promote the ideals of the. National Assembly as an institution. Hence. I would not make the attached documents public since I obtained the documents from the lead forensic auditors in confidence (find attached Annexures ‘E’ and ‘F’ is my request to the lead forensic auditors and their response).”

“Permit me to explain that any reference to 50 per cent or 60 per cent during the investigative hearing was in answer to a question by an honourable member of the committee as to whether or not, a medical doctor could act as Executive Director Projects within the confines of the NDDC Act 2000. I answered in the affirmative, pointing out that the greatest project in the world today is COVlD-19 pandemic, which is medical in nature.

Furthermore, I am made to understand that 50 to 60 per cent of NDDC yearly budgets are medical in nature. Therefore, it is fitting for a medical doctor to act as Executive Director Projects in these trying times.”

“Please accept, sir, the assurances of my esteemed regards and do pass my explanation to my colleagues in the 9th Assembly who probably misunderstood my assertion.”