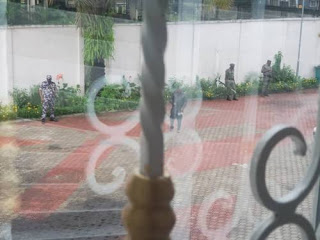 The house of Former Acting Managing Director of the Niger Delta Development Commission, Joy Nunieh was on Thursday morning blocked by 30 armed policemen from leaving her house in Port Harcourt, Rivers State, for the airport.

Nunieh was due to appear before Senate committee on NDDC in Abuja this morning.

“Nunieh just called me now. The police have surrounded her house since 4:00am in Port Harcourt. She is expected to testify before the House of Reps today. With a noticeable distress in her voice, she alleged the police broke into her premises and she expected they would take her away soon.”

Minister of Niger Delta Affairs, Godswill Akpabio, and Nunieh had last week appeared before a Senate ad hoc panel investigating the alleged mismanagement of N40bn by the Interim Management Committee of the NDDC.

At the hearing, Akpabio said he did not know the expenditure of the NDDC under Nunieh because she refused to give him briefings.

But Nunieh, who made damning allegations against Akpabio, said the minister engineered her removal for failing to dance to his tunes.

She alleged that Akpabio asked her to change the dollars in the NDDC account; sack the head of the legal team, who is from the North; remove all directors, who refused to follow his instructions and also implicate Peter Nwaoboshi, Chairman of the Senate Committee on NDDC.

According to Nunieh, Akpabio warned that if she did not follow his instructions, she would be removed.

She also alleged that Akpabio would never sign any document but rather ask his subordinates to commit fraud.

She said the minister asked her to take an oath of secrecy to stop her from exposing any of his dealings but she refused.

Mouthpiece NGR further gathered that the Rivers state Governor ordered police out of the house and later drove off with her.