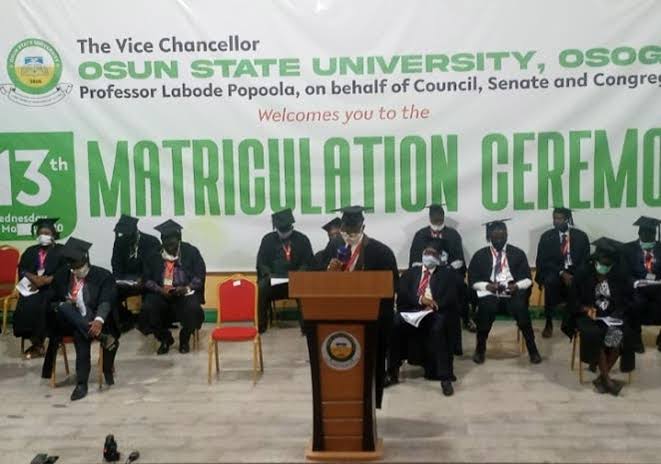 When the administration of a university is reduced to the whims and caprices of an individual, we have a disaster waiting. When personal ego is allowed to be promoted to become the propelling force, driving a university, such an institution will soon be driven into the gully of unimaginable tragedy.

Remove from the university, the democracy of freedom of thoughts and expression of opinions  considered to be at variance to the administration’s position on issues you are left with a community of merely lettered robots. But for the dogged determination of some of our comrades who are principled academics in UNIOSUN, the present vice-chancellor  of UNIOSUN would have succeeded in reducing the university to a community of spineless Yes men, uncritically towing the line of an egositic dictator masquerading as the VC. High time Prof. Labode Popoola is told that the university he currently (mis) runs is not his private estate which he can administer as he likes.

Outright lies, cheap blackmail and mendacious subterfuge have no place in the university culture. Audacious daring, knowledge and truth based on painstaking researches define its culture for the health of the university system, hence egocentric and confused personal whatever the position should be allowed to import into the system, the prebendal and pedestrian  tendencies of partisan, opportunistic and unscholarly politics.

It is unarguable that the university must keep stride with developments in the civilised world. In this connections, we recognise the need for our universities to hop into the technological highways in its engagements. But this does not come easily or cheaply, and certainly not uncritically and in the must ridiculous and condescending manner.

Requisite quantum of fundamentals must be injected into the system to achieve the objectives in line with global best practices. This belief has been the driving force behind ASUU’s persistent struggle to nudge our government to this path of responsibility.

On the claim by UNIOSUN, that 99% of the students possess the ability and wherewithal to key into the platform is farthest from the truth. Haba! Children of poor workers, artisans, petty traders struggling to go to school did not rely on cyber cafes to key in? They all have smartphones and computers to do so? Has professor Labode Popoola suddenly forgotten his own background? In case he has forgotten. Would he have been able to stand amongst his peers today if he had been denied the opportunity of attending a tuition free education by the privileged few who had access to public funds then?

Please let’s fear God. UNIOSUN should stop playing politics with the truth. Even if these poor children don’t have the voice to speak for themselves their maker(Eleda) will not keep quiet. If we occupy position of power today, and use it to oppress the helpless and hapless, there is always nemesis waiting at the backyard. Those in power today at UNIOSUN, using such power to oppress the children of the poor, remember, you will not escape the harsh judgment of history.

The UNIOSUN is challenged to come out openly and declare how much they got from the just matriculated students who were made to pay the full compliments of matriculation levies including academic gown that they never used. If this is not a scam, I beg what else is? A people can be deceived  for some time not all the people at all times. ASUU has spoken, the people know who is saying the truth and who is telling lies and for what purposes.