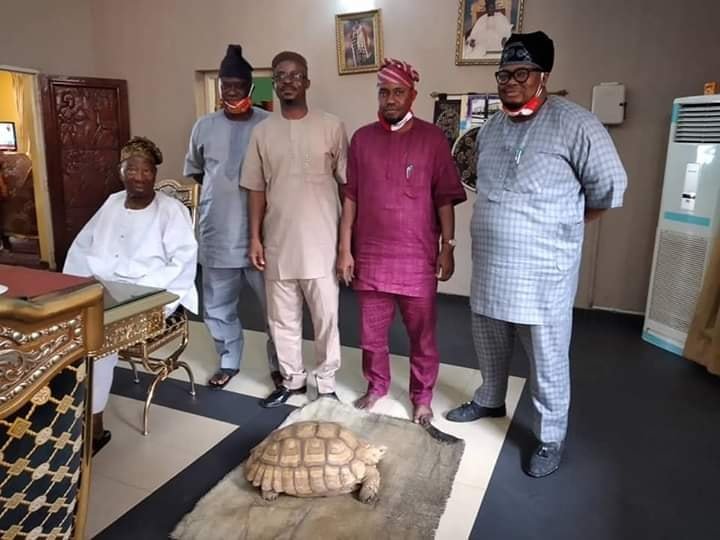 A new tortoise was today presented to the Soun of Ogbomoso’s palace by representative of Oyo state governor Engineer Oluseyi Makinde led by the state’s commissioner for education, Lawyer, Olasunkanmi.

It would be recalled that the 344 years old tortoise popularly called Baba Agba died in October 2019 and has since been embalmed.

The new tortoise was presented to Oba Jimoh Oyewumi Ajagungbade 111 by the state commissioner for Education Bar Olasunkanmi Olaleye and a friend of the Governor simply identify as Double D.

The representatives were accompanied by the caretaker Chairman of Ogbomoso North Local Government Alhaji Ibrahim Ajagba and his South Counterpart Mr Timothy Oyeniyi.

Confirming the development, Mr Toyin Ajamu, the private secretary to the foremost monarch said “we received the new tortoise this afternoon from the government, I think it is to feel the vacuum left behind by Baba Agba.”

He added that the custodians of the tortoise have been told not to expose it to the public  pending the time scientists will give us adequate information, including the age and species about the tortoise.