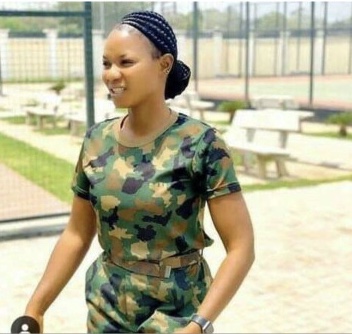 Nigerian Army girls page has uploaded a post on their facbook on behalf of a beautiful Female soldier who is in need of a serious man.

The beautiful lady who is confused why guys are still afraid of sending messages to her on social media posted on facebook to try look for a man that will show interest in her.

A Facebook user called Victor Agbavictor advised the beautiful soldier to keep praying to God so that she can get married to the best man. Victor said ” love doesn’t know any boundary and being a soldier doesn’t mean guys will not approach you”

Another Facebook user, Omoale Isaiah responded to the post and said “It is not polite for a lady to tell a man that she wants to marry him. Accept Jesus as your Lord and Savior, your husband is on your way”

Many other users expressed their mind by making comments on the post. Read more about people’s comments in the screenshot below: