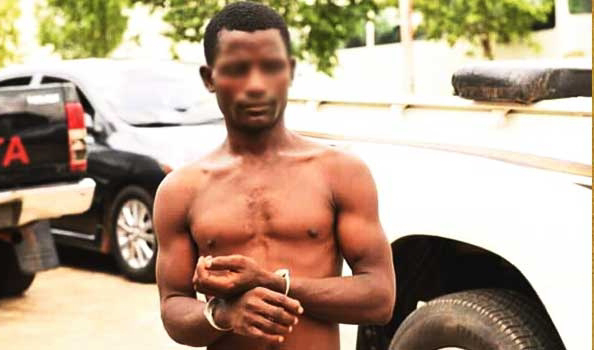 A 27-year-old man has been arrested for allegedly defiling a three-month-old baby and three other minors in Nasarawa State.

The Nigeria Security and Civil Defence Corps (NSCDC) who paraded the suspect on Wednesday said the suspect, Adam Yaro, perpetrated the act on May 27.

NSCDC Deputy Commandant of the State Command, Bisi Olugboyega, said the victim who is his fourth was being defiled in Adogi community of Lafia East Development Area where he and other victims all reside.

The suspect when interviewed said he cannot explain how it happened, pleading for justice to be tempered with mercy.

“Me too I don’t know what made me begin such an act. I won’t do it again. It was the work of the devil that made me commit the act,” he said.

“We got the information that he was the one but since he wasn’t apprehended we were mute. Since the government has arrested him and he confessed to the crime, they should help by giving him the punishment he deserves,” she said.

Adam’s victims are said to be between the ages of three months and one and the half years.

It was gathered that the abused victim, who has been unable to defecate properly since the incident happened, has undergone three surgeries where a section was opened in her stomach to enable her to defecate as she awaits the fourth one soon.