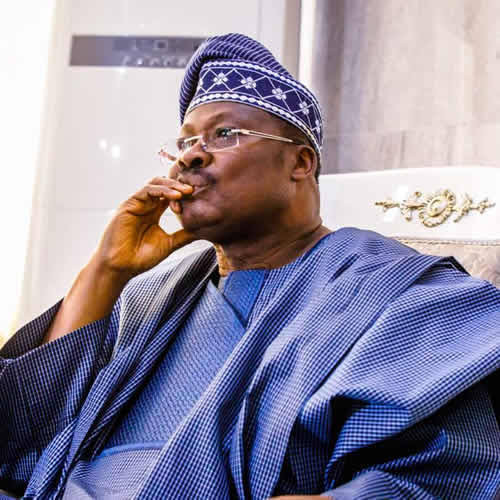 The immediate past Oyo State Governor Abiola Ajimobi has reportedly recovered after surgery on his lungs in a Lagos Hospital.

Mouthpiece NGR recalls there were uneasy calmness and palpable fears in Ibadan, the Oyo State capital, over the health of the former Governor last week.

The internet went into frenzy that the former governor’s family rejected medical assistance extended to them by the state government under the leadership of Governor Seyi Makinde.

Ajimobi, who is also the Deputy National Chairman of All Progressives Congress (APC), South, was said to be seriously ill last week and on admission at a high brow private hospital in Lagos.

He reportedly took ill suddenly at his Lagos home in the middle of the night last week Tuesday after returning from the lavatory to his bedroom and slumped onto his bed in the presence of wife and former Oyo first lady, Mrs Florence Ajimobi.

The first lady reportedly called in the security detail with whom she rushed the ex-Governor to the same hospital where the late Chief of Staff to President Buhari, Mallam Abba Kyari, was being treated before he died.

It was alleged that Ajimobi suffered cardiac arrest and has been put in the Intensive Care Unit (ICU) of the hospital.

It was further alleged that Ajimobi had been diagnosed as having coronavirus and was in a coma, put on a ventilator at the Intensive Care Unit (ICU) of the hospital.

However, when contacted, the former SA to the governor on youth and sport, Mr Afeez Bolaji Repete denied the rumor.

He said in a chat with Mouthpiece NGR that there was nothing of such. He reiterated confidently that Ajimobi is fine.

Another aide who spoke to Mouthpiece NGR confirmed that the governor only fell sick and that his sickness is not connected to Covid-19.

Earlier today, Mouthpiece NGR gathered that the former governor has come back to life after an operation by foreign medical experts.

It was reliably gathered that the Deputy National Chairman of APC, South, is in good condition and responding perfectly to the treatment with the foreign medication.