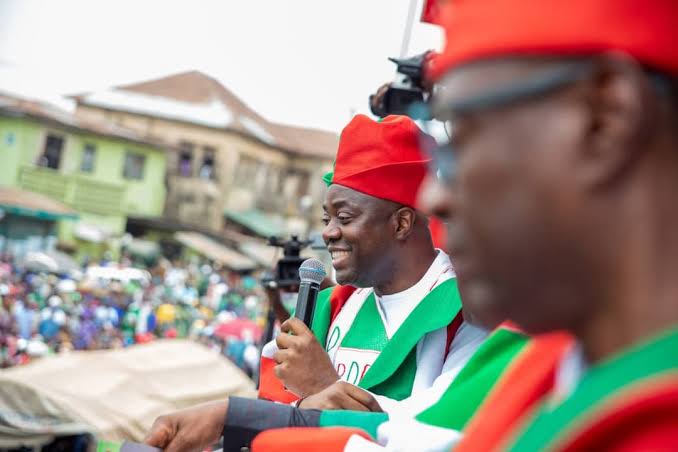 Except for divine intervention, It may be tough for Governor Seyi Makinde to lay hands on PDP party return ticket to contest 2023 election as some leaders including members of his party he rose on their shoulders to frustrate former Governor Rashidi Adewolu Ladoja out of the Party during the 2019 general election are now in frosty relationship with him.

Though an hour is long in politics but the discrepancies are too glaring to be swept under the carpet.

It should be recalled that a chieftain of the party in the state, Alhaji Olopoeyan had on a radio station opened “Can of worms” about the party internal crises and how governor Makinde is neglecting both party leaders and members that worked for the governor to be elected.

Olopoeyan who maintained that the party members are suffering also said he doubt PDP will emerge in the coming election because the Governor has neglected the structure that brought him to power.

The aftermath of the interview has continued to generate mixed reactions as some leaders in the party and members are speaking up against the governor while his loyalists are defending their boss and shifting blame on opposition’s party members.

Mouthpiece NGR exclusively gathered that the likes of Hon. Mulikat Akande Adeola, Abass Oloko among others are in frosty relationship with the Governor.

Adeola who has been out of town for some months was said to have met with some national stakeholders and party leaders in Abuja to complain about the Governor’s action.

Another chieftain in the state had on Sunday cautioned the governor to stop running Oyo like his personal company.

Saka Balogun while appealing to concerned people in the party cautioned the governor of one man’s decision method thereby agitating for a need of elders committee.

The PDP chieftain in his explanation stated that Governor Makinde has more of campaign experience but not having enough government runnings experience, therefore show the needs for Elders committee.

“I’ve no problem on all his appointments, he’s doing good but he needs to allow more hands in his decision making particularly the elders of the party needs to be carried along the more in his government. Makinde is only using the operational guide of how he runs his business to run the government which is not the best”.

In his reaction to Alhaji Olopoeyan statement, Balogun expressed his satisfaction over the issue but only to be displeased with where he made his words known.

According to him, Olopoeniyan worked for Makinde both in the day and night and therefore make it unfair if Makinde will not allow him to be part of his government.

“Olopoeniyan should have made his grievances known internally rather than resulting to the use of media or public.”

Balogun who further advised Oloponiyan not to dismantle the house he built and embrace peace also cautioned him and other PDP leaders not to be bothered with whatever proceeds out of Auxiliary mouths.

Mouthpiece NGR recall Alhaji Mukaila Auxiliary had in a rebuttal described the recent statement of Alhaji Adebisi Olopoeyan as malicious, unfounded and belligerent.

Auxiliary who asked Olopoeniyan to pull down his messy statement vehemently refuted the statement that Governor Seyi Makinde may not be reelected in 2023 because he has neglected the structure that brought him to the state power.

He disclosed that the governor is for the entire state and partisanship is over that’s why GSM is focusing on his roadmap of accelerated development agenda for the state. He then asked who’s Olopoeniyan? What’s his standing in the government? What was his contribution in the last election? Is he not the one that almost truncated the electoral polls of Senator Muhammed Kola Balogun (MKB) and other victorious candidates of the party when he convinced and confused the stooges like him to vote opposition candidate? Is he not the one that the then PDP gubernatorial candidate Engr Seyi Makinde satisfied with everythin and yet remain disgruntled?

Reacting to the rebuttal, Balogun said Olopoeniyan and other members of the party should ignore Auxilliary because he had proven to be of low status in speech and in actions.

Meanwhile one of the aides of the governor in an exclusive interview on Sunday revealed that many God fathers are not happy with Makinde’s emergence.

The Special Adviser on Strategy and Political Matters to Governor Seyi Makinde, Honourable Babatunde Oduyoye, said a lot of political Godfathers in Oyo State were not happy when Governor Makinde won the 2019 gubernatorial election in the state.

Oduyoye, a former member of the house of representatives, stated this while speaking on the first year anniversary of the governor and political developments in the state in an interview with Nigerian Tribune.

According to him, ” There is a grand design by the opposition to ambush the government of Governor Makinde and it can be fully explained. During the electioneering, he was highly underrated, he was not given a chance. APC was in power at the state and at the federal level and nobody thought Makinde had a chance.

“Even a former governor who is a member of the APC boasted that because Governor Makinde has never been a councillor or held any political posts, then it was not his turn yet. But the moment he won the election, the status quo and the powers that be got offended. It was like Obama winning the presidential election in the USA. With that victory, a lot of people were rested politically, because it was a paradigm shift in the state. It was a dream come true for us to have a generational shift and I have always been an advocate of that.”

He explained further, “So, with the emergence of Governor Makinde, a lot of the so-called godfathers are not happy. But that development gives hope to the younger ones. Look at how the development has reshaped the politics of the state? We now have a young speaker and some commissioners such as the Commissioner for Youths and Sports and Commissioner for Energy Resources, who are either less than 30 or in their early 30s. Today,

Oyo State became a model for other states across the country and this annoys the APC.”

“So, for the PDP candidate to win in Oyo State, it brought attention to the state for members of the opposition in Abuja and Lagos. So, there is a grand design, because of 2023, to undermine the government of Governor Makinde at all costs. The opposition in the state want to come back into office in 2023. But what has been their strategy? Their strategy has been to find ways of derailing the administration. It has been that of creating fake news in the media. It has been that of employing and paying e-rats on social media and criticizing without offering any alternative on every single move that the governor has made,” Oduyoye added.

Following the development, one may conclude that the controversies revolving around is an indication that all is not well with the party in the state.

An audio conversation that ensued between Olopoeniyan, Abass Oloko, Auxiliary and made available to Mouthpiece NGR today, states the obvious.

Do you agree that Oyo PDP members are suffering and smiling?