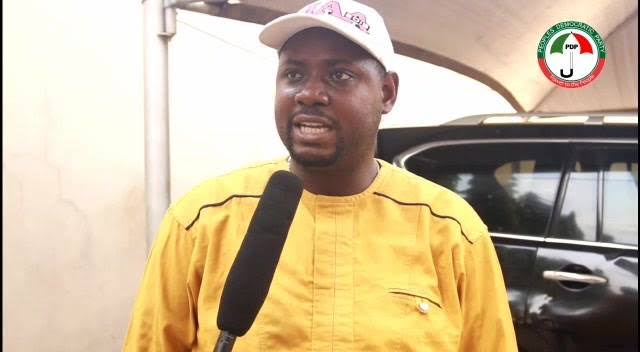 Open Salawu had in a statement on Friday asked Governor Makinde to delegate duty to his deputy while comparing his first year in office to that of his predecessor Senator Abiola Ajimobi as an “Orange to Apple.”

The former special Adviser to Ajimobi on work and transport said Ajimobi is more equipped and prepared to Govern than what we are witnessing now.

“The people of Oyo hope and wish for a better, efficient and effective government not a pretence and a Governor that is trying to be a populist.”

“As much as he is struggling not to make mistake the more he is making more mistakes and contradicting himself every time. I think he should relax and take deep breath or take a break and allow his deputy Governor who happens to be more prepared than him to guide or advise him for now.”

Speaking to Mouthpiece NGR, Hon. John Oke lambasted Open Salawu for discrediting the good work of Governor Makinde and comparing his one year in office with Ajimobi 8 years administration characterized with corruption, waste of resources and bad leadership.

The Ogbomoso born politician said Oyo has long suffered from endemic government corruption and mismanagement, which, among other things, rob ordinary Citizens of their basic economic and social rights to health and education.

“Upon assumption to office, Engineer Seyi Makinde paid the outstanding salaries and arrears of Oyo State workers, and also started the payment of civil servant salaries latest on 25th of every month.

“Every now and then, the people are singing his praises and it appears they are not regretting to have entrusted such responsibility to him.”

“Not only the promotions of Civil servants were made within his 100 days in office but payment of Pensioners salaries. The Governor donated his salaries and cleared all the arrears.”

He said the people of Oyo state are not succumbing to hopelessness and defeatism as witnessed in the previous administration. Governor Makinde is fixing problems just exactly he put an end to payment of PTA fee, declaring Education free, strengthening security and completing and commissioning projects in several sectors to improve the welfare of Oyo state.

Oke wondered why Open Salawu who he said he’s a baby politician in Ogbomoso and new comer in politics would be badmouthing Makinde led administration in less than two years.

He said, “Makinde has been in politics since 1999. He has been making impactful contribution to the society even before elected as the executive governor of Oyo state.

He stressed that about 120 students in the Law school were granted a bursary of 60 million naira as a support to their education. Likewise N500million bailout funds was given to LAUTECH last year December during the tough time and the institution is on strike free.

“The Polytechnic Ibadan also received 300 million naira subvention and for advanced accreditation by National Board for Technical Education(NBTE).”

“Equally the Colleges of Education and Agriculture at Lanlate and Igboora respectively had been revived, revitalized and life injected back into those campuses.”

“Today, Oyo state workers are being paid their salaries, allowances and renumerations before end of the month. They are now giving their optimum performance and smile home.”

“In the Local Government Service Commission (LGSC) where I serve, the Governor sponsored training of local government at all levels which has been abandoned for many years.

“Governor Makinde also effected Payment of leave bonuses, payment of pensions to mention but few. Today, he has given a nod in building of Lacal Government Service Complex which is the center of Local Government to help in management of service.”

“The state is also attracting investors to invest or partner with the state to develop the economy of the state, which is blessed with both human, mineral and material resources.”

Asked if Makinde is not allowing his deputy to perform as stated, Hon. John Oke said the two are in good relationship.

“Deputies complements effort of Governors. Recently, Engineer Olaniyan said there’s no rift between him and Governor. The purported statement of “no cordial relationship” between them is Ill-informed and should be disregarded,” he added.