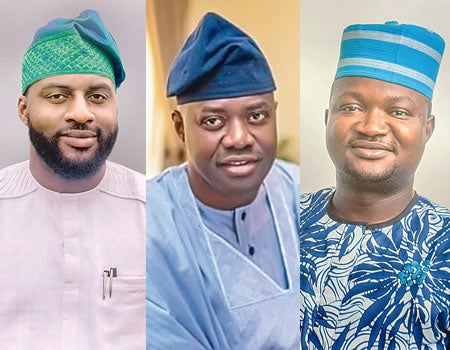 WALE AKINSELURE, in this report, looks at the issues around the purported plan to impeach the Speaker of the Oyo State House of Assembly, Honourable Adebo Ogundoyin.

IN recent weeks, the Speaker of the Oyo State House of Assembly, Honourable Adebo Ogundoyin, has been in the eye of the storm. Just as the nation began battling COVID-19, so did some caucuses in the Assembly began to scheme against the leadership of the state legislative for alleged lack of transparency in running affairs of the Assembly and indecisiveness in canvassing for the general desires of lawmakers from the state governor, Seyi Makinde. Indeed, the brewing storm was not only targeted at sweeping Ogundoyin off his seat, but also most of the principal officers.

The plot against the Speaker was reportedly hatched by members of his initial inner caucus, who felt they were beginning to be sidelined in the running of the Assembly. At the emergence of the Speaker, on June 9, 2019, members like Chairman, Parliamentary, Honourable Ayo Fatokun; Chief Whip, Honourable Hakeem Adedibu and former Chairman, House Committee on Works and Transport, Honourable Olamide Akinajo, were said to have struck an atonal chord to be members of his kitchen cabinet. However, as Ogundoyin began to see the responsibilities on his shoulders, he decided to bring in more cooks into the kitchen.

The move did not go down well with the initial members of the kitchen. They reportedly feared that, with the accommodation of more people, their influence on the Speaker’s decision may begin to wane. Consequently, they were said to have begun to lobby more lawmakers into an alleged impeachment agenda.

At the mention of possible impeachment of the Speaker, leaders of the Peoples Democratic Party (PDP) in the state, including Governor Seyi Makinde; Chairman, Governor’s Advisory Council (GAC), Hosea Agboola and the Commissioner for Special Duties, Chief Bayo Lawal, convened meetings with the lawmakers to calm frayed nerves and have members express their grievances. Pointed questions were asked those alleged to be behind the brewing crisis, including Honourable Akinajo, Honourable Ayo Fatokun and Honourable Hakeem Adedibu, all of who denied the plot.

The lid over the seemingly calmed crisis appeared reopened when Ogundoyin, at last Tuesday’s sitting, announced the removal of Honourable Akinajo as the chairman of the House Committee on Works and Transport, with Honourable Kehinde Olatunde named as his replacement. As the head of the Committee on Works and Transport, Akinajo had asked to know how much was spent on the recent renovation of the lodge of the Speaker and deputy speaker. With Akinajo recently becoming a mogaji, there also grew fears that he may be backed by some forces from the outside to destabilise the Assembly and get at the governor. The decision to remove Akinajo as the chairman of the committee was therefore perceived to be targeted at curtailing his growing influence.

It was however gathered that at the parliamentary caucus held the day before the sitting when the removal was announced, members had been made to understand that there would be reshuffling of House committees. While a part of the principal officers said they were consulted before the speaker made the Akinajo announcement, some other principal officers alleged that they were not carried along in the decision.