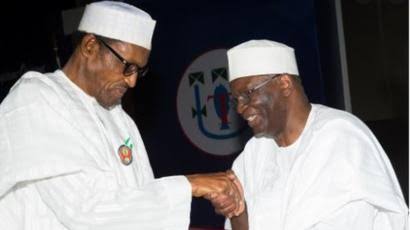 There are emerging indications that fresh panic may have engulfed the Nigerian presidency since the appointment of Prof Ibrahim Gambari as Chief of Staff to President Muhammadu Buhari.

Sources within Aso rock disclosed that palpable fear purportedly grip some principal officers over the probability of total overhaul of the State House, and by extension, the Federal Executive Council (FEC).

She went for an accomplished technocrat and close ally of the President, Gambari, then, solicited the support of renowned elder statesmen, and overwhelmed the perceived Cabal she has been confronting over time in the era of late Chief of Staff, Abba Kyari, purportedly led by Mamman Daura.

A stakeholder in the polity, Chief JC Ikunna, had taken to the social media platform to analyze the appointment of Gambari as Chief of Staff. He highlighted: “What we saw today was a coup de’tat, in which the de facto president is now 100% loyal to the *CARTEL*. In case you are not aware, the cartel is made of OBJ, TY Danjuma, Abdul Salami, Guazo, and even their latest recruit, Jonathan Goodluck.”

He alleged: “Aisha wanted control of the Villa. She knew she could not do it alone, so, she reached out to the CARTEL for their assistance, and they willingly gave it to her, knowing that the enemy of your enemy is a friend.

“Mamman Duara, the head of the CABAL, has been fully schemed out.

“Look out for a complete overhaul of Buhari’s cabinet, and all other appointments. Nigeria may just have been saved from the brink of catastrophe. We have Aisha to thank.

“Never underestimate the power of a beautiful woman who has all the facts.”

There are high expectations that with the appointment of Gambari, “things are about to change” in Nigeria.