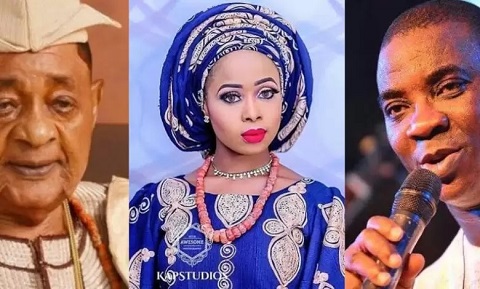 Veteran Fuji musician, Wasiu Ayinde, has cursed the blackmailers behind the allegation that he is having an extramarital affairs with one of the youngest wives of the Alaafin of Oyo, Queen Ajoke Badirat Adeyemi.
The Fuji icon, in In an Insta-Live interview with the Ovation Publisher, Dele Momodu revealed that the allegation was fabricated by people who are not in support of his installation as Maiyegun of Yorubaland.
K1 the Ultimate, as he is fondly called, also disclosed that there is no way it is even possible for him to have done that because his paths with the Alaafin’s wives rarely cross.
He said, “It can never be possible. I only got to meet the wives when I was installed as Maiyegun or once in a while when we met and greeted at events. So I don’t always have the opportunity to know all the Alaafin’s wives.
“Aside from this, I’m a well grounded Yoruba man and such is a taboo for me.”
He stressed further that people who spread rumours like this do that just because they have lost the fear of God.
He stated further “Most religious people are hypocrites. If they have the fear of God, no individual could be so bold as to insult kings not to talk of smearing Alaafin’s image like that.
“An insurmountable curse also known as karma awaits those who are responsible for the rumour mongering because God is not mocked.”
The Mayegun also demanded more professionalism from the media while carrying out their duties because the ethics of journalism requires due diligence which will never allow a trained journalist publish that kind of story.
He then appealed to all Nigerians to respect the traditional institutions, specifically the kings, because they are the representatives of God on earth and desist from smearing their honours to score cheap points.
“It was very disrespectful for anyone to have been that bold to get Alaafin involved in his hatred for me. We need to respect our traditional institutions for our culture preservation.
“For the sake of my race, I have forgiven them. I have no issues with anyone. I became Maiyegun for the advancement of the race which will benefit all, I see no reason why that should be the essence of that hatred.”